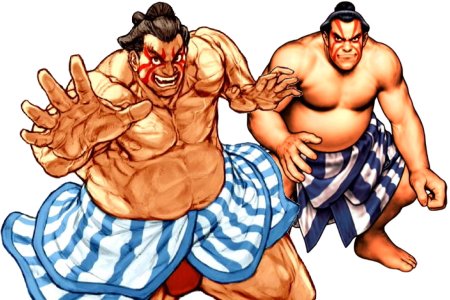 Of all of the original World Warriors from Street Fighter II, Edmond Honda has typically been on the bottom of the popularity list. The Capcom vs. SNK marks his first appearance outside of the Street Fighter II series, other than his inclusion in the third and final Street Fighter Alpha series. Nevertheless, Honda has always had a small, but loyal crowd of players who enjoy using him. Surprised to find out that the world outside of Japan thinks little of Sumo Wrestling, Honda is determined to prove that sumos are indeed the best fighters in the whole world.

Normal E. Honda plays very much like his Street Fighter Alpha 3 version with his additional throw move, and Level 3 only Super Combo. Extra E. Honda, on the other hand, has fewer moves and reflects his Super Street Fighter II iteration, with the addition of his Super Combo from SSF2T. In Capcom vs. SNK 2, he plays like his Normal version.