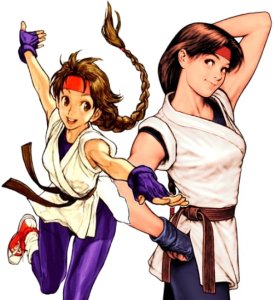 For more information about Yuri, see her Art of Fighting and King of Fighters (Orochi Saga) entry.

Yuri Sakazaki is a character from SNK's Art of Fighting series and The King of Fighters series as one of the supporting characters. She was introduced as a damsel in distress in the original Art of Fighting, and Art of Fighting 2 was the first game Yuri appeared in as a playable character. Since then, she has appeared in many SNK fighting games, including The King of Fighters series and SNK vs. series, alongside her older brother Ryo Sakazaki. She is the first and only known female practitioner of Kyokugen Karate. Yuri Sakazaki is a very sweet young woman. She always cares about her family and friends. She loves and honors her father Takuma and sees him as an example, and she also respects her older brother Ryo as well. She is bothered when Takuma and Ryo constantly get involved in her affairs. She also enjoys being with Robert, but she denies to reveal her true feelings for him since his journey to Central America to assist his childhood friend, Freya Lawrence. She has many friends within the King of Fighters circle and outside of it and enjoys spending time with them.

Normal Yuri is based on her appearance in The King of Fighters series, primarily from '96 and beyond. Extra Yuri is closer to her depiction in the Art of Fighting series. She is a blend of the two in Capcom vs. SNK 2, favoring her KOF depictions.