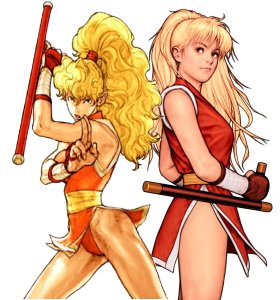 When Capcom chose new characters to be added to the Capcom vs. SNK roster for the sequel, they chose people from the opposite end of the popularity spectrum, and chose relatively obscure characters. While Guy from Street Fighter Alpha would have made an interesting addition to the character selection, he was fairly well known. Along with Eagle, Kyosuke, and Yun, Capcom chose Maki, a character who had not been used since her original appearance in the Super Nintendo only sequel to the original Final Fight. However, Guy's influence over Maki's design can not be overlooked, as she plays extraordinarily similar to Guy. She even dons red tennis shoes that are similar to Guy's. In her original design, she was a former leader of a bosozoku gang, who loved to get into street fights. In the game's limited storyline, she is trying to find and defeat Guy in order to become the next Bushin-ryu successor. She was updated from her original appearance, based on her involvement in a Street Fighter manga starring Sakura titled Sakura Ganbaru by Masahiko Nakahira in which she and Sakura fought each other. Her inclusion in Capcom vs. SNK 2 inspired her addition to the GBA and PSP versions of Street Fighter Alpha 3, where she actually compliments Guy's presence in the selection.