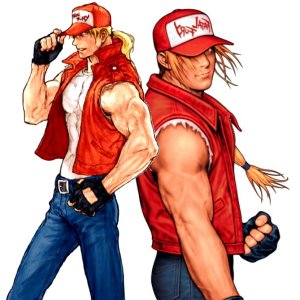 For more information about Terry, see his Fatal Fury and King of Fighters (Orochi Saga) entries.

Terry Bogard is a character created by SNK, and is the main character of the Fatal Fury series. He has appeared in every Fatal Fury and The King of Fighters game, and is one of the characters of choice to symbolize the company in crossover games, merchandise and publicity. He appears to fit many Japanese stereotypes for an American character in appearance, personality and speech (his in-game vocabulary is usually limited to American colloquialisms, such as "Okay!" and "Hey, c'mon, c'mon."). Terry Bogard is the brother of Andy Bogard. Both of them were orphans adopted by Jeff Bogard. He is often referred to as the Legendary Hungry Wolf (from Garou Densetsu, meaning Legend of the Hungry Wolf). He has a pet monkey named Ukee (the previous mascot of SNK before Terry) and is said to have the unique ability of accurately guessing a woman's measurements just by glancing at her. He also has a knack for shooting three-pointers or free throws in basketball, which explains the creation of his Power Dunk move.

Normal Terry is based primarily on his Fatal Fury incarnations, with the inclusion of his Buster Wolf Super Combo from Garou: Mark of the Wolves. Extra Terry is based on his appearances in The King of Fighters, mostly the early versions from '96 to '98. Extra Terry really only differs in one move; he loses Rising Tackle and gains Power Dunk. In Capcom vs. SNK 2, he has both moves.