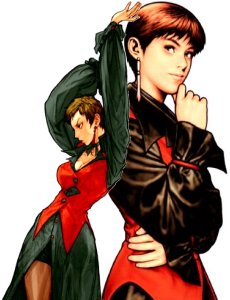 For more information about Vice, see her King of Fighters (Orochi Saga) entry.

Vice was conceived to be the Yang that would balance Mature's Yin. If Mature was to be the ruthless woman, Vice was to be the cruel woman. Her rage, impulsivity and irrationality are properties of Yang. Her name is a sexual term used to describe sexual immorality. It can also mean a character's flaw. In addition, the Japanese word for "malice", tsumi, is often translated as "vice". Her rage can be seen in a few of her voice samples. The voice samples heard during her special/super moves are various profanities in Japanese. Many of Vice's special/super moves appear to be various names of Extreme metal bands. Vice is a somewhat violent person, taking great pleasure in killing others and seemingly immune to their pain; she also seems to be in an eternal state of anger and frustration. Additionally, it should be noted that her and Mature are not precisely friends, but instead help each other in order to free the power of Orochi. Vice's hobby has once been said to be bench pressing, which could also account for her strength based moves.