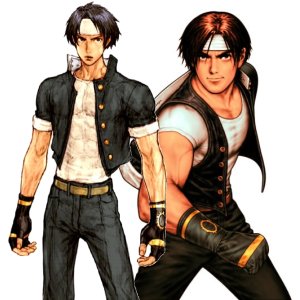 Kyo Kusanagi is one of the main characters in The King of Fighters series. In the games, Kyo's style of speech (pronouns and grammar style that are indicative of arrogance and even rudeness in Japanese culture), distinctive victory cry (Ore no... kachi da!, Japanese for "This is my victory!" and translated in KOF: Maximum Impact as "I am... the champion!"), and win quotes seem to indicate that he is arrogant, a little devil-may-care and very cocksure of himself. Despite this demeanor, he treasures his friends and family, enjoying their presence and particularly doting on his girlfriend Yuki - a detail reflective of his heritage, as she is descended from the bloodline of Kushinada, the maiden that was nearly sacrificed to Orochi before the intervention of the Kusanagi, Yasakani and Yata clans. He and his often-absent father Saisyu tend squabble with and grumble over each other when they are together, but merely in jest. By contrast, he gets along well with his mother Shizuka and is very respectful to her.