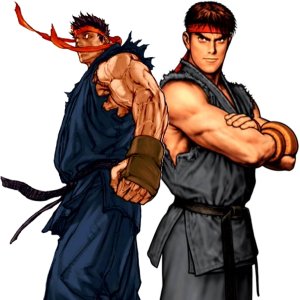 Evil Ryu is the representation of Ryu when he gives in to the Dark Hadou, the murderous intent that is inherent in the form of martial arts that he practices. Akuma is an example of a man who has completely and willingly sacrificed his humanity in pursuit of fighting perfection, and has become a soulless killer. Ryu hangs on the razor's edge of remaining in control of his mind, and losing himself to the Dark Hadou. Embracing the Dark Hadou substantially increases a fighter's power, and opens new abilities, such as the Shun Goku Satsu killing technique. By the time Ryu enters the Capcom vs. SNK tournament, he feels very much in control of himself, but the proximity of the Orochi power emanating from Iori triggers a relapse in Ryu's ability to control his power, and he becomes a raging warrior that only the best fighters earn the right to compete against.