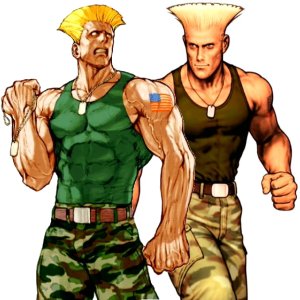 Guile is a colonel in the United States Air Force. He was trained in hand to hand combat at an early age by his commanding officer Charlie. The student/mentor relationship became a close friendship as the two continued to work side by side. One day, Charlie was given an assignment to work with the international police agency Interpol, to help with an air reconnaissance mission over the region of Thailand where M. Bison was reported to be building his underground crime syndicate Shadowloo. Charlie went off on that mission... and never returned. Getting no assistance from his superiors, Guile eventually began to seek information on his friend's whereabouts on his own. He carries Charlie's dog tags with him at all times. Eventually, he would work with Interpol agent Chun-Li, who also sought revenge on M. Bison for the death of her father.