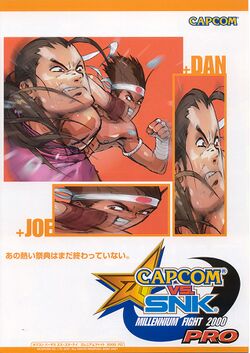 Capcom vs. SNK Pro is a fighting game that was developed by Capcom and released in 2000. It is an upgrade to the original Capcom vs. SNK, which features characters from various Capcom and SNK franchises, most notably Street Fighter II and The King of Fighters. Pro attempted to create a better balance between the existing characters by improving upon (or toning down) the strengths and abilities that characters possessed in the first version. It introduce two new characters, Dan and Joe, and changed a few of the moves of the existing characters.

In addition to the character and rule tweaks, Capcom vs. SNK Pro provided players with all of the characters that were initially locked away in the original version. Players who took the time to unlock every feature in the Dreamcast version of Capcom vs. SNK would not need to repeat their efforts the second time around. When Pro was converted for play on home consoles, it was ported to the Sega Dreamcast, but was only released in Japan. It was also ported to the PlayStation, where it saw a stateside release.

See below for a summary of the changes from the first Capcom vs. SNK to Pro. For information on how characters have been changed, please refer to their individual character pages.