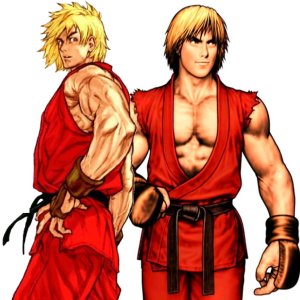 Ken began life as a rebellious and spoiled child of a member of the wealthy Masters family. Foreseeing trouble in his life ahead, Ken's father thought it would be best to send him to Japan under the tutelage of his former martial arts sensei, Gouken. With little say in the matter, Ken reluctantly traveled to Japan where he met his new guardian, along with another young Japanese boy his age who was undergoing the same training that he would be. The two boys, as different as night and day, became fast friends, and Ken began to thrive in his new home. He gained not only discipline, but also pride in his newfound fighting ability, and he would go on to become the winner of several American fighting tournaments. But no matter how much he won, it was all meaningless to him whenever he wondered when he might have the chance to rematch his former friend and rival, Ryu.

Normal Ken is very much like the version of Ken found in Street Fighter Alpha 3, including his Level 3 only Shippuujinrai Kyaku Super Combo, and the addition of a new special kick attack, Ryusenkaku. Extra Ken is nearly identical to Ken as he was played in Super Street Fighter II Turbo including his three extra roundhouse kick moves. In Capcom vs. SNK Pro, the command for his new kick attack was reversed. In Capcom vs. SNK 2, he is truly a fusion of his Normal and Extra modes, with simplified motions for his three roundhouse kicks being added to his Alpha 3 command set.