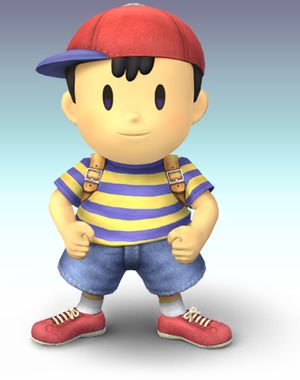 Ness needs to be unlocked.

Ness is the 13-year-old psychic boy who is the hero of EarthBound on the SNES. Although he is small, he can be lethal when used correctly. Especially his PK lightning. Aim the PK lightning to ness and blast him through enemies. This attack will kill anyone who is 50%+ it is much harder to control than lucas's. His PK Flash is used for people who are caught off guard and people who are falling down. It also finishes people who are 50%+ in other words, great for 2 on 2.

Ness's up and down smash's charge is unique as its only to hold the attack out longer and doesn't increase its damage and knockback. 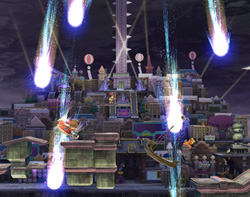 Bowser is slow but can deal a lot of damage. An easy way to rack up damage is to jump nice and high then use PK Thunder. If this hits then Bowser is stunned for a bit allowing you to fall down then jump up and repeat the process. Try and stay away from Bowser as his Fire Breath can be absorbed by PSI Magnet, so he has no ranged attacks.

Ike is a slightly harder version of Bowser because:

Use the same strategy to rack up damage as you did for Bowser, but you will probably have to do a bit more air-navigating. This is a hard fight.

Mario is quite fast, but can have some weak attacks. PK Thunder is not much use here as Mario can use Cape to deflect it, so don't be afraid to get up close and engage in close-range combat. You can also absorb Fireball with PSI Magnet.