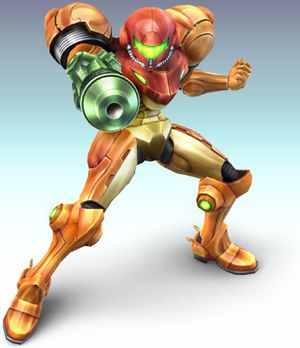 Samus is a rather unique character. She is relatively heavy, but is very floaty, traits not commonly seen paired together. While this helps Samus's horizontal recovery, it does slightly weaken her vertical recovery, with both traits countering eachother there. This also makes Samus unique in that she is a heavy character that is difficult to chain grab by characters such as Falco and Pikachu. However, the floaty trait of Samus somewhat hurts her air game; although she can stay in the air longer to string many aerials, her aerials don't combo well and this also gives her one of the worst short hop fast falls in the game, making it difficult to hit with her very strong back aerial unless she is edgeguarding. She is also rather fast moving for a heavy character, with decent dashing speed for a heavy character and a quite fast air speed, and this helps her run around the stage so she can bring out her powerful projectiles.

They're not designed to be completely defensive, so they have small jumps that limit their ability to recover from huge attacks. This is more of Power Suit Samus' problem more than Zero Suit Samus'.

Long range attacks are Power suit Samus' speciality, and they can be used in conjunction to create devastating combos even at a distance. This makes for great ways to initiate the battle, especially considering that they are very good at setting up smash attacks immediately afterwards. In multiplayer battles or when you are facing an opponent that's better than you, try to use long range attacks to avoid taking damage. But even against worse opponents, use long range attacks as they are Samus's strong point. The charge shot is a nice knockout move, but don't rule out the super missile.

Don't let her long range advantages keep you out of melee combat though, she also has attacks designed for close range so she's more of a rounded character. Just keep in mind that Samus should be at a distance most of the time. This can be annoying to some players as it makes Samus look like a big camper character like many Falco, Fox, and Snake players, so if you are concerned about that you may want to try a different character. However, you can play in close quarters and still be effective with Samus, as long as you know how to use her few very good melee range moves and set traps with Bomb to perform devastating combos. Use the grapple beam a lot as it's your longest-ranged melee attack. It can keep other fighters from getting close to you and it assists your long-range game.

Samus grabs with her grapple beam. Like all tether grabs, this move is laggy if missed. Both Samus's dash grab and pivot grab are also extremely laggy if missed. This, paired with poor throws, makes Samus's grab game poor compared to most characters. 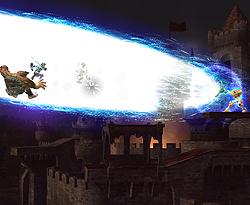 Zero Laser: Samus fully charges her laser and unleashes a powerful beam with maximum power. This beam, although it can do a lot of damage, is slow and can be jumped over. After this, her suit will fall off and you will transform into Zero Suit Samus. To become Samus again, use Zero Suit Samus' Final Smash.

It has a weak point which can easily cause your death: While you are transforming into Zero Suit Samus, everyone who has a life remaining or having saved from the beam have enough time to charge an Smash against you, as you are not invincible while transforming and you cannot even use your Shield. Be careful with that if you use the Zero Laser!