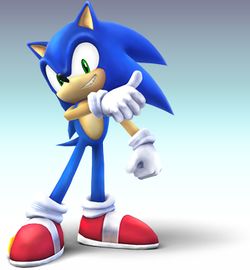 The blue blur is back and ready to unleash his skills.

Sonic is obviously the fastest character in the game, possessing the fastest dashing speed and among the best air speeds.

However, Sonic's flaws are what you would want to be aware of when going against an opponent; they include awful reach due to his small stature, poor hitbox placements (most of his hitboxes are very close to his body), and among the weakest horizontal and vertical endurance as a result of his low weight and only average fall speed (even floatier characters like Samus take less vertical knockback due to her extra weight).