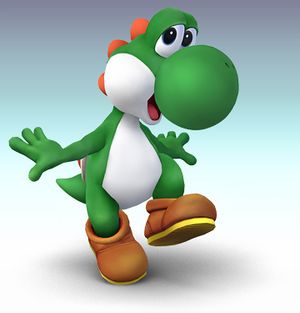 Yoshi has unusual properties which can give him an edge against players used to combating more "normal" characters. His running grab and pivot grab are stellar, and he can punish shields from midair with Egg Lay. The double jump is unusual, with some "super armor" like Snake has during his recovery, allowing Yoshi to take a hit and counterattack. His attacks also do a better job of flowing from one to the next than most characters in Brawl, letting him keep the pressure high once he finds an opening.

Yoshi has a unique shield which always covers his entire body. Unfortunately, his roll dodges are terrible, his standing grab is terrible, and he is not permitted to cancel the shield with a jump like most characters can, and he emerges from his shield slower than other characters. This gives Yoshi a hard time dealing with some projectiles and with characters whose melee attacks have notably longer range than his own.

Recovering properly with Yoshi requires turning "tap jump" off in your control scheme. Yoshi should throw eggs first, and double jump afterward. If tap jump is on, Yoshi will instead do a double jump but then cancel it when he throws his egg. Yoshi should always beware of being footstooled off stage, as throwing eggs provides only a minimal vertical boost.

An advanced technique called dragonic reverse can make Yoshi "wavedash". It is done by canceling Yoshi's double jump with an attack. This is very hard to perform and only for more advanced players.

Unlike other characters, Yoshi grabs with his tongue. 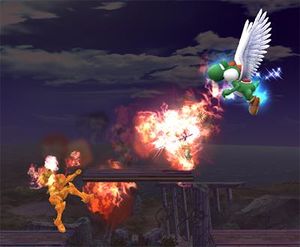 Super Dragon: Yoshi grows wings allowing him to fly, rendering him invulnerable whilst in this state, and starts spewing fire. Pressing the B button will also allow him to shoot fireballs. If Yoshi remains standing for around 3-5 seconds, he starts spewing fire automatically similar to the flame curry. However while in this form, Yoshi has no inertia hence he'll be a bit hard to control for beginners.