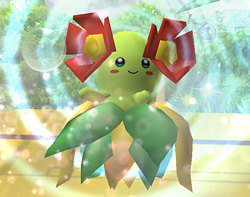 Bellossom uses Sweet Scent to cause nearby characters to fall asleep, leaving them vulnerable to attacks and unable to move until Bellossom's duration expires. This is very useful for setting up strong attacks like charge smashes, but note that opponents cannot fall asleep when airborne, and that your foes must be pretty close o Bellossom to be affected. 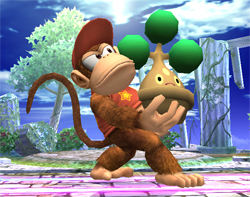 Bonsly will walk around on the stage when summoned, being an item that players can pick up. It behaves much like a Crate in that it will slow down the movement of any player carrying it, and it can't be thrown very far. However, it does tons of damage and knockback with a single Tackle when thrown, and even if it misses it can still hit opponents with full force during the brief moment where it's bouncing on the ground, which can catch approaching opponents off guard. 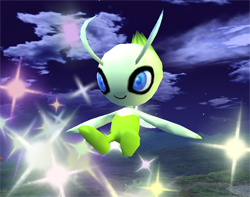 Celebi is an extremely rare Pokémon, with only a 1/493 chance of appearing. If it does appear, it will use Fly to move out of the stage while dropping Trophies. 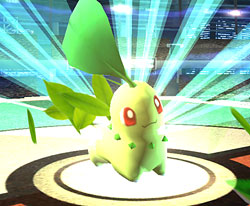 Chikorita will use Razor Leaf, throwing out a stream of sharp leaves that damages foes. It's one of the easier Pokémon to deal with, since it's attack has a limited and obvious trajectory as well as lasting very shortly. However, it can be difficult to escape the shards of leaf if caught. 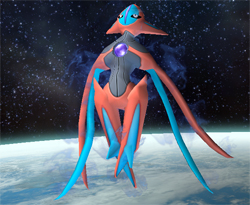 Deoxys will fly to the center of the stage when summoned, meteor smashing anyone that touches it, then launches a powerful Hyper Beam down the middle of the stage. The beam does a ton of knockback, enough to KO foes at very low percentages. The beam also has a slight vacuum effect that pulls any opponent that is too close into the blast. 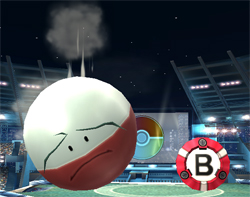 Electrode is a volatile and dangerous Pokémon. It will charge up Explosion when summoned, which will deal enough damage and knockback to rival a Bob-omb blast, and the explosion can hit the summoner. Unlike in its previous appearances, Electrode can now sometimes fail to explode, or even feint a failed explosion and explodes nevertheless after a few seconds. The Electrode can be picked up and thrown, towards the end of his appearance, like an item as it is charging up its Explosion and after a failed Explosion, but it is strongly recommended to throw it as soon as possible to avoid it exploding in your hands. 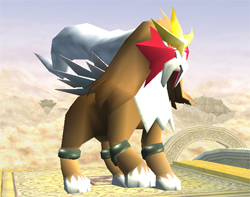 Entei will use Fire Spin to trap opponents in a huge column of fire, dealing tons of damage and knocking them towards the top of the vortex. The spin is quite damaging, but players can SDI out of the blast to escape the move before taking too much damage. The vortex does cover a pretty large vertical space, so any moves with horizontal knockback can usually knock foes into the Fire Spin.

Gardevoir uses Barrier, creating a circular shield around it that reflects any projectile thrown at it. Allies and enemies can move through the barrier freely and fight within the barrier, but using projectiles inside an opponent's summoned Gardevoir will cause it to instantly reflect and hit yourself. The reflective properties of the barrier is quite powerful, doubling the power and speed of reflected projectiles, which can spell doom for any careless enemies. 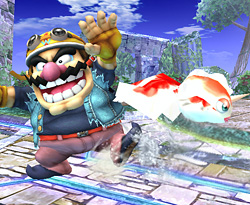 Goldeen returns once again as the joke Pokémon, doing nothing but Splash, which doesn't affect gameplay in any way. It is meant to be completely useless, so simply ignore it if you summon it. 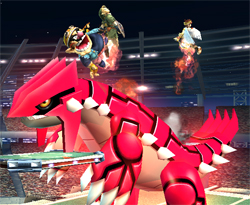 Groudon stands on the stage and burns anyone who touches it with Overheat, knocking foes back. It does surprisingly little damage and knockback for a legendary Pokémon, but does take up a lot of space, so the summoner can stay safe from enemy attacks by staying near Groudon. It can also make life difficult for recovering foes if you happen to summon it close to the edge of a stage.

Gulpin will use Swallow on nearby enemies, trapping a player inside it and slowly dealing damage, before spitting out the trapped player. Other players can attack the trapped foe to tack on more damage. You can escape Gulpin early by button mashing after being swallowed, so mash away at your controller if you get caught to minimize the damage done. 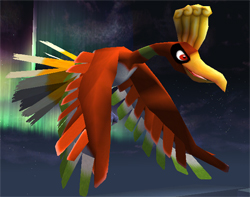 Ho-Oh will fly upward and toward the back of the stage, damaging opponents that touch it, then use Sacred Fire, creating a huge column of fire at the spot where its summoned. The pillar of fire is large enough to cover more than half of a standard stage's area, and will suck enemies caught by it to the center of the fire, making it difficult to escape the inferno. One final blast at the end will send foes flying.

Jirachi is one of the three extremely rare Pokémon, with only a 1/493 chance of being released. It drops a bunch of stickers as it uses Fly to move out of the stage.

Kyogre uses Hydro Pump, which pushes foes back but doesn't do any damage, similar to Mario's F.L.U.D.D. However, the water spout is very powerful, being able to push foes off the stage and well beyond the blastlines. It will also target and follow players, making it difficult to escape its attack, and touching it can knock enemies away, meaning it is very hard to make it back to the stage while it's out.

Latias and Latios fly off in opposite directions when summoned, then shoots across the stage one at a time, hurting opponents in their path with Steel Wing, dealing significant damage and knockback. Their sheer speed also causes a vacuum effect that can pull items and characters. They're more effective against characters with poor horizontal recoveries, as they can repeatedly knock them far from the stage or outright KO them. 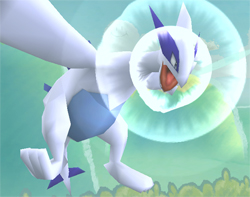 Lugia will fly behind the stage and use Aeroblast, aiming at wherever the summoner is standing. Unlike in Melee, this attack only does a single hit that knocks enemies away instead of multiple hits, but this single hit is very capable of KOing at early percentages. 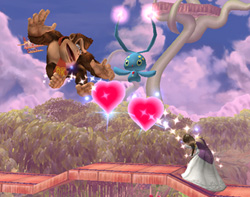 Manaphy uses its signature move Heart Swap, which switches the controls of two players close to it, temporarily forcing them to control their opponent's character. Your damage percentage and stock count is kept after the swap, and self-destructing will not cause your opponent to lose a stock, but you instead. The effect can be avoided by simply staying far away from Manaphy or by air dodging. 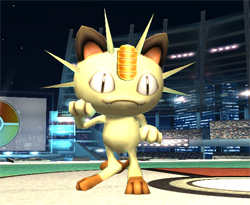 Meowth uses Pay Day, firing coins in the direction the most characters are in relation to Meowth. The scattered coins can trap foes caught in it, letting you set up strong attacks against them, possibly dealing more than 100% damage if they're caught for the whole duration.

Metagross will use Earthquake when summoned, slamming its claws into the ground to bury nearby opponents. Airborne and already buried opponents hit by the attack will instead be sent upwards. The interval between attacks is quite long, but being caught in one could give opponents an opportunity to set up a fully-charged smash attack. An interesting feature is that Metagross will automatically fall through platforms that you can drop through normally. 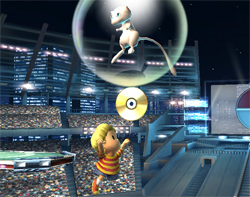 Mew is one of the three extremely rare Pokémon, with only a 1/493 chance of being released. It drops a CD that can be picked up to add to your collection as it uses Fly to move out of the stage. However, if you've obtained every CD in the game, it will simply drop stickers similar to Jirachi.

Moltres uses Overheat. If you touch it you'll burn. 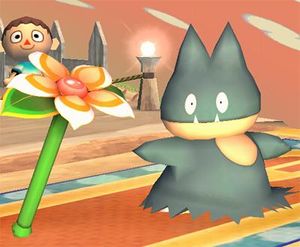 When Munchlax appears on the stage, it will slowly walk around, eating any item it encounters on the stage, including valuable ones like CDs. The moves it uses are Stockpile and Swallow. This can be annoying, but it can eat bombs without making them blow up which is good at least. 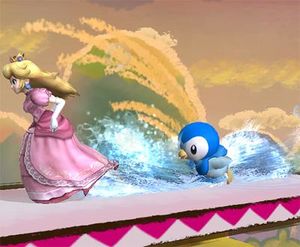 Piplup uses a Surf move to wash away competitors on the stage. 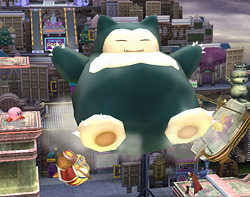 Snorlax will again fall from the sky with Body Slam and crush competitors as he did in Super Smash Bros. Melee. 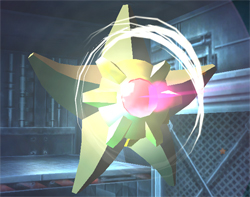 Staryu will chase one opponent and start firing the move Swift at the enemy chased. 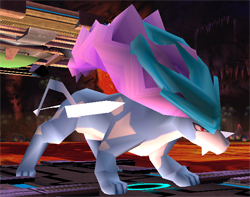 Suicune will now use Aurora Beam. After a short pause, a narrow beam of light will jolt forward and disappear. Contact with the beam is generally a one-hit KO. It can be easy to dodge, however, as the beam is concentrated in a straight line. An enemy touching Suicune will freeze. 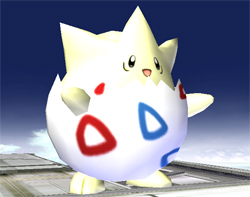 Togepi uses Metronome, allowing it to use one of a variety of moves. Maybe the screen will become dark, making you unable to see the battle for a moment, or maybe it will put a flower on top of the head of some enemy nearby, taking some damage. Togepi can also momentarily burn nearby enemies or freeze them.

Torchic will use Blaze. It will stand stationary with a circular field of flames around its body. Contact with the flames will pull the opponent in and cause constant damage. Just before Torchic disappears, it will shoot opponents out of the flames with decent strength.

It uses False Swipe by quickly dashing back and forth between two points on the ground. Enemy contact with Weavile will cause the enemy to take 1% damage and suffer the same effect as a broken shield. In this state, Weavile continues to deal 1% damage with each touch until it disappears. 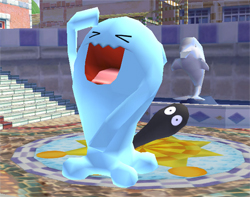 Uses Counter; if you hit it, it will become agitated, hitting anyone who comes closer. The length and power of this depends on just how hard it was hit. Be careful – it damages everybody, including the thrower of the Poké Ball.