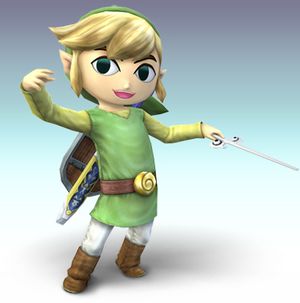 Toon Link needs to be unlocked.

falls faster than normal Link and has a greater damage ratio. Also, his Up Smash is one quick, clean slash which hits on both sides of his body and causes good upward knockback. Toon Links shield can block projectiles while standing still, which can come in handy since his only really long ranged weapon is his Bow and Arrow. If you miss while trying to grab someone, you lose time trying to recover your hookshot. Toon Link is one of the select characters that can save himself with his grab by latching onto edges with his hookshot, though his spin attack makes a much better recovery move. Toon Link has both good projectile and physical attacks. His arrows have shorter range and travel slower than Links and cause less damage (12% fully charged to Link's 15%). His bombs are good, but if you throw them too close to an opponent you can be caught in the explosion. Toon Link can be classified as an above average fighter when it comes to Offense, but his speed and shield give him an excellent Defense.

Toon Link uses his hookshot to grab. If the grab misses however, he will experience cooldown. Only use this when you're sure of grabbing the opponent. 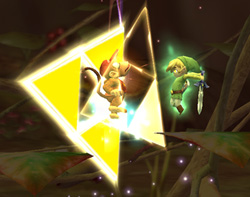 Triforce Slash: Toon Link's Final Smash is the Triforce Slash, just like Link's (except it looks more cartoonish). However, the beam of light to start the attack is smaller, due to Toon Link's smaller size. This attack with do 40-50% Damage for the first few hits, then a whopping 13% or so for the final attack, along with a lot of knockback. Most characters won't be able to recover from this attack, but some like MetaKnight and Kirby, as well as heavy characters like Bowser might be able to stand the hit.