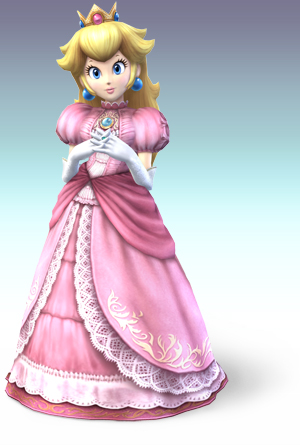 Peach is a unique strategy character with a variety of moves and techniques that make her popular among tournament players. Peach possesses the unique ability to float and move through the air for a number of seconds. This float advantage is very often utilized in combination to perform air attacks ( some of which are powerful, like her crown attack ) or to escape certain death when off of platforms. Peach also has her parasol, which she uses to jump a huge distance into the sky and uses it to uppercut an enemy. After using her parasol, it opens up and she very slowly floats down to the ground, giving the player ample time to decide his/her next move. Peaches' float ability and parasol allows her to escape certain death more easily than any other character in the game, but these 2 advantages are balanced by the fact that she is one of the lighter fighters in the game.

Advanced Peach tactics are about controlling Peach's ability to float. Floating allows many different possibilities, including aerial battles. There are two ways to initiate the float:

The second possibility allows Peach to float at any time during the jump, and not just the apex.

The other thing is that Peach's Vegetables are excellent to be used as her primary attack. They are perfect to break your opponents rhythm. Also, there's a 38-1 chance of a Much more powerful vegetable popping up, this can deal around 30% damage. There's also a more common one that isn't quite as powerful. The other helpful aspect of vegetable is that on rare occasions she can pull up a bob-omb, a Beam sword, and other various items.

The other important this is that when your opponent comes to engage you in a melee battle, you have two options:

They're both very good but Bomber is better if your damage is low and you can afford the risk of the character dodging and then counter-attacking. But if you think you can't take that risk. (Especially if they are very good at that type of thing.) Toad is the way to go, you hit them back to where they came from and start throwing even more Veggies.

And the last thing that many people don't do is throw the items they pick up, people usually run in to attack if they pick up a beam sword or another melee items. Obviously you'd throw the item if it was a bomb. But throwing the item you get will allow you to stay at a distance.

Peach Blossom: The screen will get a frame of Peach, she will dance slowly at her own pace and all enemies will sleep. As closer to Peach, the more time you'll sleep. Also peaches will fall to the ground to pick them up and eat to regain health. But beware because she can knock you easily now that you are asleep. This final smash is most effective in moving stages (e.g. Mushroomy Kingdom and Rumble Falls), as the foes will probably die when the screen slowly moves away from them. Keep the foes near the edge of the screen beforing unleashing this Final Smash in moving stages.