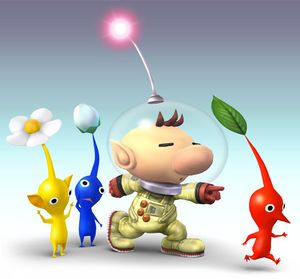 Olimar, while a smaller character, can really pack a punch. Here are several tips on succeeding with him:

The best Olimar users know which Pikmin do what, and what they're best used for. They use Pikmin order to arrange their Pikmin the way they want them, and if they don't have time to, they suit their attacks to the Pikmin being used. There is a list of all of them below.

The Red Pikmin deals Fire damage, and is usually the first Pikmin that professionals get rid of. They're bothersome, and not as powerful (or useful) as any of the other Pikmin. They are pretty basic, and the Fire properties don't really amount to anything special. They are almost as strong as Yellow (electric) Pikmin, but they don't have the electric effect that Yellow Pikmin have (that is used to follow up with combos). Overall, the Red Pikmin isn't horrible, it's just not recommended for a good Olimar.

To get rid of it, use Pikmin Throw (either off the edge, or at your opponent)

The second strongest Pikmin (next to Purple), this Pikmin deals Electric damage, allowing combos (if you can move fast enough and follow up with it.)

Deals a very generous amount of knockback, making it generally pretty easy to kill at 110% or so, if you get a sweetspot on a forward smash. Usually, 1 or 2 staling doesn't have much effect, but overusing forward smash will make it weak and useless.

Defiantly used for Pikmin throw, not just because it's strong when thrown, but because it's more durable so it can withstand more that's thrown at it.

The Blue Pikmin's backthrow (grabbing, then throwing backwards) is the second-strongest backthrow in the game, and (when used correctly and near an edge) can kill lighter opponents at as little as 100%.

Used for spacing, Purple Pikmin do not latch on, when thrown, and instead provides knockback. They are the strongest Pikmin, and are mainly used for smashes.

The Upthrow can kill at ~110% on lighter opponents (when the move isn't staled at all.)

Very very good for Pikmin throw, but slightly rarer than the others.

This Pikmin has 1 HP, meaning, any single hit in the entire game will kill it instantly, making it the weakest.

However, every second that it holds onto an opponent it does 6 damage. Which, if all 4-5 seconds get tabbed in, you can deal up to 30 damage from a single one.

Smashes are very weak and throws are pointless with this Pikmin.

Olimar grabs and throws with his pikmin. Purple Pikmin goes a laughable distance while White, Red and Blue Pikmin gives him the longest grab range in the game.

End of Day: Captain Olimar prepares for the night. He rides his ship into space and wild creatures start attacking the ones who stayed behind. On lift off, if someone is under Olimar, they get pit-falled. The more people the more damage, but that doesn't mean another enemy can't steal your KOs. When time's over, your ship crashes in the stage making a huge explosion. If you are lucky enough you may crash on somebody. This Final Smash can also affect a team player since it involves moving the screen away from the main stage. This means in a team battle, teammates will get hoop damage from being offscreen, even when Friendly Fire is off.