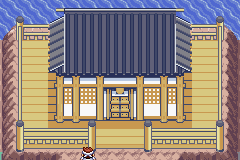 In the Battle Arena, the trainer has a standard three-versus-three battle; however, if they don't knock out the opponent's Pokémon in three turns, they are judged on mind (use of offensive moves), skill (effectiveness of moves) and body (ratio of HP at the beginning and end of battle) to decide the outcome. A circle is worth two points, a triangle is worth one point, and a letter X is worth zero points. The Pokémon with less points faints immediately. In the event of a tie, both Pokémon faint. During the battle, the trainer cannot switch between Pokémon.

Greta's name is from guts, which the Battle Arena tests.