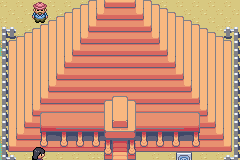 In the Battle Pyramid, the trainer chooses three Pokémon to accompany the trainer through a pyramid. The goal is to make it to the top of the pyramid by finding the blue warp-tiles and teleporting to the next level while avoiding trainers and wild Pokémon encounters. Initially, the visible space around the player's sprite is very small, making navigation harder. This space increases with each battle won. To limit the player's bagged items, the item bag is taken away and replaced with the Battle Bag, which stores items found inside the pyramid. Also, the participating Pokémon cannot hold any items from the item bag when signing up. At the end of the challenge, which spans seven floors, any new items held by the Pokémon are placed in the Battle Bag, which is once again exchanged with the item bag until another challenge. Each floor's wild Pokémon follow a specific theme.

After progressing through 21 and 70 floors, the trainer can fight the Pyramid King Brandon.

Brandon's name comes from brave, which the Battle Pyramid tests.