The underwater entrance in Route 128.

Seafloor Cavern is a subterranean cave deep beneath the waves of Route 128. The cavern is somewhat maze-like, and constantly requires the use of Rock Smash and Strength. In a misty cave, you'll discover TM26 (Earthquake). For more details on getting through the Seafloor Cavern check below. You'll initially find the stolen submarine docked in the underwater entrance, so dive to find the rest of the cave. 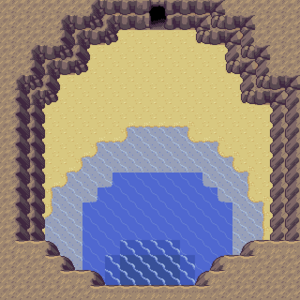 The inner entrance in Emerald. 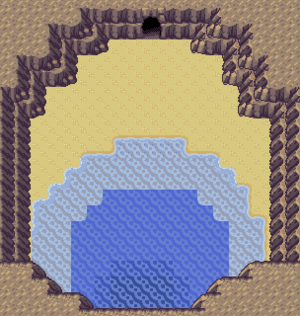 The inner entrance in Ruby and Sapphire.

Well, you made it, the Seafloor Cavern. Now all that's left is to go inside to Room 1. Use rock smash on the left rock, then use Strength to push the boulder down. You may then push the other boulder to the right. Room 1 has two Team Aqua/Magma Grunts and three doorways leading to the Entrance behind you, Room 2 in the southeast, and Room 4 in the north. 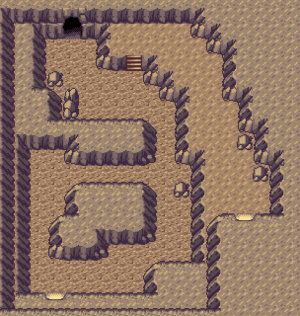 Room 1 in Ruby and Sapphire 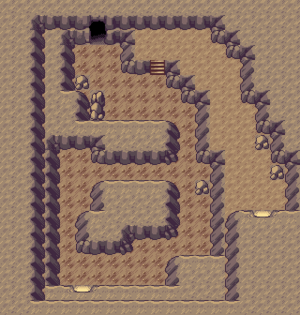 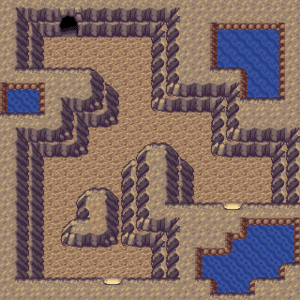 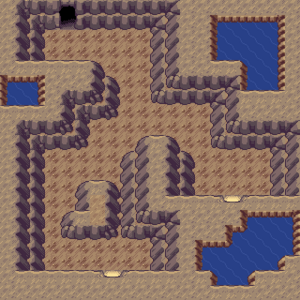 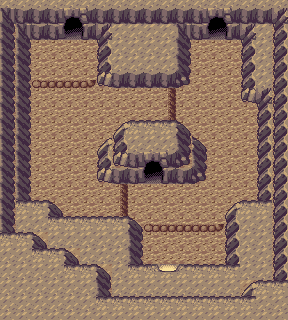 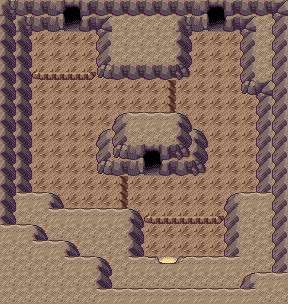 When entering from Room 2's Southeast exit, you will emerge in the centre of Room 3. Head North to reach the Southwest exit of Room 4, and head South and hop off the ledge to return to the cave entrance.

When entering from Room 2's Southwest exit, you will emerge in the Northwest corner of Room 3. Hop off the ledge to encounter a Team Aqua/Magma Grunt (In Emerald, there are two grunts that can be battled in a Double Battle). After the battle, hop off the ledge to the right and go North to Room 4, or South to the Floor's entrance and the cave exit.

This is the first room in the Cavern that changes depending on what version of the game you're playing.

The gist of this room is that you can only initially cross it diagonally - meaning that the Northeast corner is inaccessible from the Southeast corner, and vice versa for the west side. However, it is possible for the player to access the Northern corners from each other, negating the need to backtrack through previous rooms to get from one corner to the other. 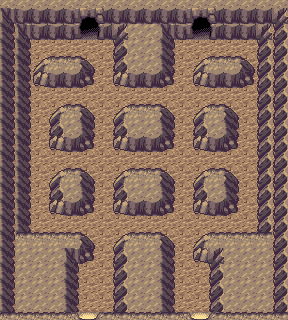 To get to the Northeast corner from the Southwest corner, push the first boulder one space North. Head along the West paths and turn right at the T-Junction. Push the second boulder East and turn left. Head North and push the third boulder North, and then smash the rock to your right. Head East and push the final boulder to the East. The Northeast corner leads to the Southwest entrance/exit of Floor 6.

To do the opposite (Southwest from Northeast), do essentially the same steps but in reverse. Unlike the Northwest to Southeast route, you cannot access the other Southern corner this way. 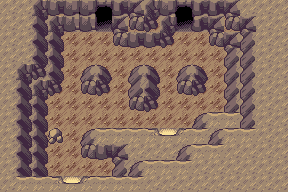 In Pokémon Emerald, the room has a completely different layout, and thus different methods to get from one corner to another. 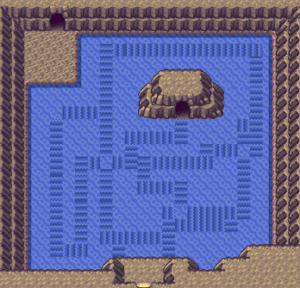 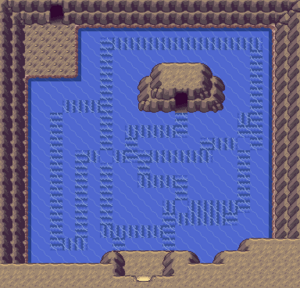 Room 5 is filled with currents that cannot be fought against. In order to get to the centre and North entrance/exits, use the currents to your advantage!

To start off with, use Surf and head straight North into the current. Go with the flow until it stops you to the bottom right of the centre island. Pick the current heading North to continue. It will loop you around until you are on the left side. Now, you have a choice: Head South to the beginning of the Room, West and wrap around to the Northwest entrance/exit, or East to get to the Centre entrance/exit. The Northwest path takes you to the Southwest corner of Room 7, and the Centre path takes you to the entrance of the cave. 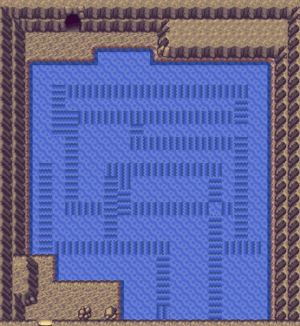 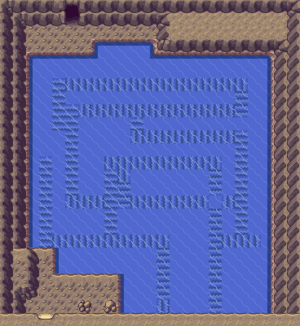 Room 6 is similar to Room 5 in that it has strong currents. When you emerge from Room 4, you can only go one direction: West. Be sure to stick to the very bottom however, or you might risk getting caught in the wrong current and looping back around! 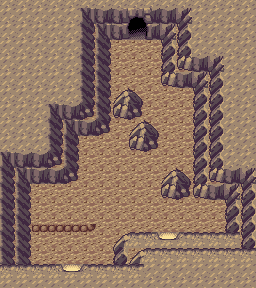 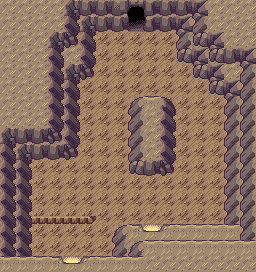 The boulder puzzle is arranged in a sort of upside down pyramid, with the "base" on the North side and the "peak" at the South side. It's relatively simple when approaching from the Southeast. Begin by pushing the "peak" boulder one space two the left, and turn right into the newly created gap. Push the boulder to your left West one space, and walk into the above opening. Push the boulder to your right East one space, and walk up to the scenery rock. Then just push the final boulder to the right to encounter the Team Admin, and gain access to Floor 8.

In order to complete the puzzle from the Southwest corner, push the boulder next to the ledge North one space, and the "peak" boulder East one space. After that, just continue the puzzle using the same steps as the Southeast method.

Courtney's Camerupt has the ability Magma Armor, which nullifies freezing effects. For moves, it has Earthquake for STAB with its Fire/Ground duel typing, Rock Slide and Take Down for coverage, and Amnesia to raise its Special Defense.

Courtney's Mightyena has the ability Intimidate, which lowers the rival Pokémon's Attack. For moves, it has an all-Normal type lineup, with Take Down, Scary Face, Roar, and Swagger.

The layout of the room is the same as in Ruby, but Courtney has been replaced by Aqua Admin Shelly.

Shelly's Mightyena is exactly the same as Courtney's, so see hers for information on it.

Shelly's Sharpedo has the ability Rough Skin, which causes any Pokémon that inflicts it with physical attacks to be damaged themselves. For moves, it has Crunch for STAB with its duel Water/Dark typing, Screech and Taunt to affect your Pokémon's stats, and Slash for coverage.

In Pokémon Emerald, the room has a different layout, and while there are some boulders to push around, they can also be completely ignored. Additionally, you'll have to battle Shelly in a double battle with a regular grunt.

Shelly... really isn't harder than she was in Sapphire. In fact, you could say she is even easier, since her Pokémon are now both level 37 instead of 38. Speaking of which:

Shelly's Sharpedo still has Rough Skin, but its moves have been altered. It now sports Scary Face, Crunch, Screech, and Slash.

Shelly's Mightyena, likewise, also still has Intimidate, and also has a new moveset. It now has Roar, Swagger, Scary Face, and Take Down. 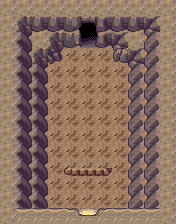 Floor 8 has the most complicated puzzle out of all of them. Begin by going to the first trio of boulders and pushing the side ones North, and the centre boulder to either side. Push the boulder above you one space North, and the boulders beside you West and East respectively. Now just do the same thing to the top three boulders as you did to the first three - Sides to the North, Centre to the side. 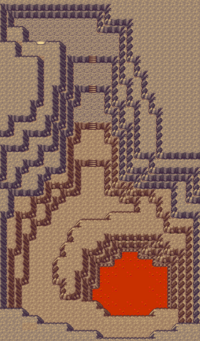 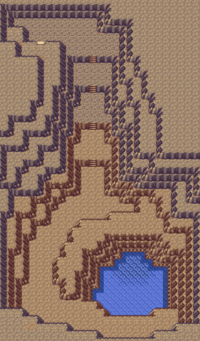 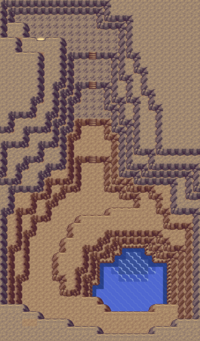 And finally, you're at the final room! All that's left is to pick up TM28 Earthquake from near the entrance, and confront the Team Leader.

After the battle, the orb stolen from Mt. Pyre will begin to glow on its own, and the Legendary Pokémon will awaken! However, the legendary will simply escape from the cave, with Team Members messaging The Team Leader that the situation has become rather dire outside. Your work here is now done.