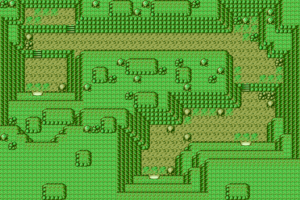 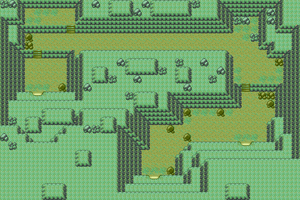 The Rusturf Tunnel connects Rustboro City (via Route 116) and Verdanturf Town. It itself, however, is quite boring. Just about the only thing that is noteworthy about the tunnel itself is the fact that wild Whismur are very common here (in fact, Whismur are the only Pokémon that will be encountered while in Rusturf Tunnel!). However, Whismur provides one HP point for EV training, and due to the low level of the Whismur encountered here this may turn out to be a good spot for EV training the HP stat of your Pokémon.

The first time you enter Rusturf Tunnel (from the Route 116 side), there will be a Pokéball on the ground in the alcove to the north. Head east, and you will find the Team Aqua/Magma grunt who stole the Devon Goods as well as Mr. Briney's Wingull. He will try to run away from you, only to find that the tunnel is not complete, and he has fled into a dead end. Battle him. Upon defeating him he will return the Devon Goods, and Mr. Briney will enter and retrieve Peeko.

At this point, you're probably wondering, "Where do I go next?" Your next destination is Dewford Town, where you will earn your second Gym Badge. Unfortunately, Dewford Town is on an island, so you can't get there by yourself at this point. Fortunately, you have an alternate means to get there: if you return to Route 104 (South) and enter the house there, you will find Mr. Briney chasing Peeko around a table endlessly. Talk to him and he will offer to take you to Dewford Town.

Once you reach Verdanturf Town, enter the tunnel from the opposite side and use Rock Smash to destroy the rubble blocking the tunnel. You will then be given HM 04 (Strength) as a reward. In addition, you now have a quick and easy way to travel between Rustboro City and Verdanturf Town.

There is also a side path you can take from the Verdanturf Town entrance. You can battle a Hiker here. Past him, you will find a tunnel which leads you into an otherwise inaccessible part of Route 116. You will find the Blackglasses hidden on the ground there (it won't be visible as a Poké Ball on the ground, but you still pick it up the same way, once you know where it is).