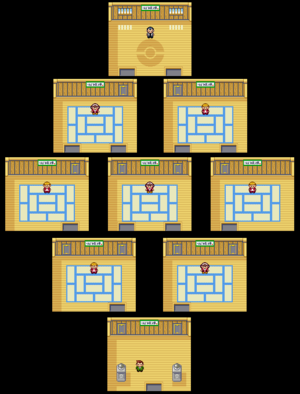 This Gym's specialty is Normal Pokémon. This means that there are almost no recommended types of Pokémon to play, however Fighting-type are the exception to the rule as they are super-effective. Fortunately, Norman and his Gym trainers can be beaten with any team of balanced, well-trained Pokémon. The Gym itself has a diamond-shaped layout; made up of nine rooms containing a trainer with only one Pokémon each. Depending on the ‘specialty’ of the room, each trainer gives their Pokémon an item on their first turn (except in the Recovery Room), therefore providing a different challenge in each room. To reach Norman, you only need to beat three trainers, but challenging all eight of course still gains valuable experience for your Pokémon.

Norman, despite how strong his Pokémon would be otherwise, has one fatal flaw: both of his Slakings have the Ability called "Truant", meaning that they do nothing every other turn. This gives you ample time to wittle both of them down before they can become much of a threat. Both Slakings have the moves Facade and Faint Attack, making them even more predictable. In fact, the only difference between them is their levels, and their 3rd and 4th moves: the level 28 Slaking has the moves Encore and Yawn, while the level 31 Slaking has the moves Focus Punch and Slack Off. Any high-damage dealing move, regardless of type (except for Ghost), will take them down.

His Vigoroth, however, is more dangerous (despite only being the mid-tier evolution of the Slaking line). The main reason behind this is, of course, its Ability: Vital Spirit, which prevents Sleep from any source. As for moves, it has Slash, Faint Attack, Facade, and Encore. However, any high-damage dealing non-Ghost type move will still be enough, since it's Normal type.

Like the other gym leaders, Norman's team in Emerald has been significantly upgraded, so now he's an actual fight instead of a speed bump. Not a very big fight, mind you, but a fight nonetheless. He's ditched his level 28 Slaking and replaced it with a level 27 Spinda and a level 29 Linoone. Not only that, but his level 31 Slaking has received some upgrades too. The Vigoroth is the same as in Ruby and Sapphire though, so it won't be covered here.

His Spinda, as said before, is level 27. Its ability is "Own Tempo", which negates any attempt to Confuse it. As for moves, it has Teeter Dance, Psybeam, Facade, and Encore. Don't worry if you've never seen Teeter Dance before, as it's Spinda's signature move. All it does it confuse all adjacent Pokémon (i.e., all Pokémon except for Spinda).

Linoone is level 29. It's ability is Pickup, which is completely useless for NPC trainers so ignore it. As for moves, it has Slash, Belly Drum, Facade, and Headbutt. Belly Drum in particular is interesting, as it halves Linoone's health to significantly increase its ATK.

Slaking is back, and better than ever! While it still has Truant and is still level 31, when it does it get a chance to attack, it'll probably hit back hard. It's moves are Counter, Yawn, Facade, and Faint Attack. If you're wondering that Counter does, it hits your Pokémon with double the amount of damage that you dealt to Slaking. Since it has high health that you'll probably be wittling down with high-damage moves, this has a very high chance of One-Hit KO'ing your Pokémon.

After you defeat Norman, he will give you the Balance Badge and TM42 Facade. You will also be able to use HM03 Surf, which can be obtained from Wally's Dad in the first house west of the Gym.

Now you have the ability to Surf, you can return to Mauville City and continue your journey by heading to Route 118. To get back, you could retrace your steps in getting to Petalburg City (via Rustboro City, Rusturf Tunnel, and Verdanturf Town), or head east to Oldale Town before going north to Route 103 and Surfing across the water. This patch of land is just a short walk from the Trick House, just north of Slateport City and right next to the southern entrance to the Cycling Road.