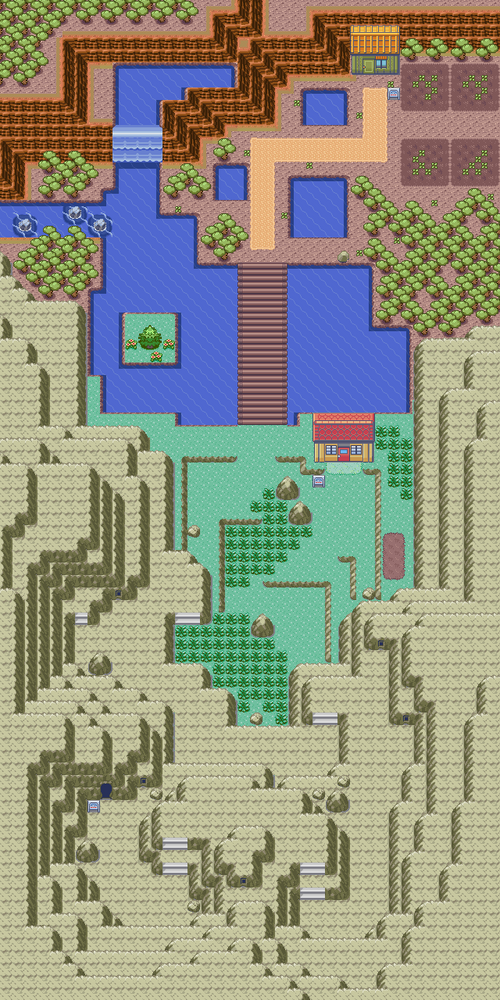 The first building you see as you leave Fallarbor Town is home to the Fossil Maniac and his brother. The Fossil Maniac is, as the name suggests, a fossil collector. He's dug an entire tunnel through the back wall of the house, just to look for fossils. Talk to the maniac's brother, and he'll give you TM28 Dig. In Pokémon Emerald only, talking to the Fossil Maniac will cause the second fossil in the Route 111 Desert to appear on top of Mirage Tower.

Just west of the house is a Gentleman and his Poochyena. Talking to him will reveal that his Poochyena roars at anything that gets close, making the Gentleman lonely. He will then give you TM05 Roar, blaming his plight on it.

Once you cross the bridge, go behind the yellow house with the red roof and collect the Berries from the eastern ledge. Then leap down and enter the house. This is Lanette's home. Talk to her to receive a Lotad Doll (Sapphire/Emerald) or Seedot Doll (Ruby). The next time you visit a Pokémon Center, her PC will be called Lanette's PC. Near Lanette's house is a man who will give you a Berry. Return here to get a new Berry each day, with five different berries to collect. When you're done, head south down the path.

In a light pinkish-tan rock, there hides a Carbos. There's also a hidden Protein further ahead, but it requires Rock Smash.

Other than the trainers, there's nothing else for you to do here, so head through the cave entrance and into Meteor Falls.