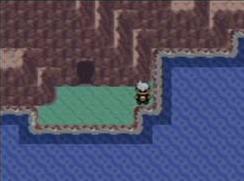 Mt. Pyre is a place where people gather to remember lost Pokémon. Since this is a cave, anywhere you step can result in a battle. Climb the mountain until you reach a grassy ledge with stairs leading down to a rocky ledge. Here you'll find TM48 (Skill Swap). The second floor has some trainers.

Make sure you avoid the holes in the floor. Also pick up the Ultra Ball in the lower left corner of the room. Then head up to the third floor. More trainer battles await.

Search the left wall to get a Super Repel, then go up another floor.

Head up to the fifth floor.

Climb to the highest floor.. the sixth.

The first floor has a door leading outside to the outside of Mt. Pyre which has the very rare Pokémon Chimecho at the top two patches of grass. There are also hidden items inside some of the gravestones.