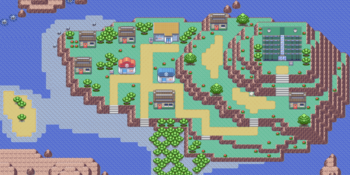 Mossdeep City is the easternmost City in Hoenn (discounting Ever Grande city), and the only city in the region completely surrounded by water. It houses multiple places of interest, including the 7th Gym.

Mossdeep Space Center is a massive launch facility for rockets, located on Mossdeep's highest point. A Sun Stone can be obtained from a sailor on the first floor.

In Pokémon Ruby and Sapphire, the center has no other value beyond the Sun Stone, in Emerald, it is the site of a major battle between the player and Team Magma (see the section "after the gym" for details).

Thanks to the nearby cave having the potential to hold rare stones, Steven Stone has decided to make Mossdeep his home. He keeps a part of his extensive rock collection here, and is more than welcome for you to take a look.

In Pokémon Ruby and Sapphire, he gives the player HM08 Dive, but it cannot be used outside of battle until you defeat Mossdeep's gym.

The house west of the Pokémon Center has a brother and sister inside. The boy likes visiting Secret Bases, and will tell you where your Secret Base is (if you have one).

Just north of the Pokémon Center, a man can be found who will tell the player the preferred color of Pokéblock for their lead Pokémon.

This one is specific to Pokémon Ruby and Sapphire. In one of the houses, an old man and a door can be found. Going through the door will lead you to the room where e-Reader trainers appear.

In Pokémon Emerald only, a game corner can be found instead of the Backdoor House. It provides the ability for player of Pokémon Emerald to interact with other people from Pokémon FireRed and LeafGreen and other copies of Emerald in two mini-games. This requires the Game Boy Advance Wireless Adaptor.

Visiting the house nearest to the launch facility's staircase will result in meeting a young woman and her Wingull. Talking to the Wingull will cause it to fly off, towards Fortree City. Returning to Fortree and talking to the Pokémon Breeder in the northeast house will result in a Mental Herb being given to to player.

In Pokémon Emerald, there is a man on the western shore of the city, who will teach a compatible Pokémon the move Dynamic Punch. This is a one-time opportunity, so pick wisely!

Mossdeep Gym is the 7th Gym in Hoenn, and one of the few obstacles remaining in your path to becoming the Champion! It's theme is psychic Pokémon, and consists of a maze of conveyor belts (Ruby & Sapphire)/teleporters (Emerald).

The gym is also the only one in the region to have two Gym leaders. They're the twin psychics, Tate & Liza.

If you picked Mudkip as your starter, then Tate & Liza are hilariously easy. Lunatone and Solrock are both Rock/Psychic type, which means that they are both weak to Water type moves. Considering how far into the game you are, your Mudkip should now be a Swampert, and can easily one-shot both of them with moves like Surf, Water Pulse, and Hydro Pump.

If you didn't pick Mudkip, then the weakness above still applies, but it may be slightly more difficult to take them down. Emphasis on slightly.

Lunatone is level 42 and has the ability Levitate, which prevents Ground-type moves and arena traps from hitting it. For moves, it has Light Screen to raise its Sp.Def for 5 turns, Psychic to deal STAB damage, Hypnosis to put your Pokémon to sleep, and Calm Mind to sharply raise its Sp.Atk.

Solrock is also level 42, and also hold the ability Levitate. Its moves are Sunny Day to make the arena Sunny, Solar Beam to take advantage of the now-sunny arena, Psychic for STAB, and Flamethrower to once again take advantage of it being sunny.

Tate & Liza also have 4 Hyper Potions , which will most likely heal their Pokémon to full health every time.

In Pokémon Emerald, the twins have a significantly better team, adding Claydol and Xatu to their roster. Lunatone and Solrock remain exactly the same, except they now both hold a Sitrus Berry too.

Claydol is a level 41 Ground/Psychic type. Its ability, like Lunatone and Solrock, is Levitate, which prevents Ground-type moves and arena traps from hitting them. Claydol's moves are Earthquake to deal an incredibly high amount of STAB damage, Ancient Power to annoy you, Psychic for more STAB, and Light Screen to raise its Sp.Def for 5 turns.

Xatu is a level 41 Psychic/Flying type, and has the ability Synchronise, which applies any status condition its afflicted with to the player's Pokémon. For moves, it has Psychic for STAB, Sunny Day to aid Solrock, Confuse Ray to confuse your Pokémon, and Calm Mind to raise its Sp.Atk.

Defeating Tate & Liza awards you with the Mind Badge , the ability to use Dive outside of battles, and

This part is for Emerald players only

After beating the Gym, it will be worth your time to head over to the Launch Facility. As you enter, you'll find that Team Magma has attacked the space center in order to steal rocket fuel, and then dump it in Mt. Chimney to make it erupt! Ironically, this wouldn't have happened had you not stop them from controlling Groudon back at their Mt. Chimney base, but let's ignore that.

The first floor contains only some Grunts, and can easily be dealt with.

Every Grunt on the first floor must be defeated in order to proceed to the second floor. Upon doing so, you meet up with Steven, who was also fighting Team Magma. You two decide to team up, so that Magma can be brought down. You also find both Magma Leader Maxie and Magma Admin Tabitha, who will engage with you in a double battle against you and Steven. Oh, and there's a few grunts up here too.

Maxie & Tabitha vs. the Player & Steven[edit]

On the one hand, Maxie and Tabitha have a very powerful team of Pokémon, and naturally have excellent coordination too. On the other hand, you have an incredibly strong teammate in the form of Steven, and his three Steel types. None of the Magma duo's Pokémon have Fire-type moves, so there's little chance of Steven getting OHKO'd. Maxie starts to rethink his actions on being misguided, wondering if Archie is also misguided in his thoughts. Steven invites you to his house here on the island! Make sure to swing by for HM 08 Dive!