It's time to enter the world of Pokémon once more! This time, Littleroot Town is your home, and the local Pokémon Professor's home too. After meeting the locals in a rather unorthodox way, you'll travel through Hoenn, defeating trainers and Pokémon alike, all to become the very best the region has to offer!

Littleroot is a small village located in southern Hoenn, and the first settlement that the player encounters. After choosing your trainer's name and gender, you appear in the back of a moving truck. Upon exiting the truck, you will appear in front of the Western house if you chose to be male, and the Eastern house if you chose to be female. Additionally, your mother will guide you into the house after asking how the ride in the back of the truck was.

Once you enter your home, you will notice some mover's Pokémon unloading your family's belongings. Your mother will tell you to set your clock in your room upstairs. The time you enter affects some events in the game, so make sure you set it to what you want. Upon doing so, your mother will come upstairs and remind you to check your desk for anything you need. On said desk, you will find a manual with instructions on how to save your game inside, and a PC with a Potion inside, so be sure to grab it! After this, head downstairs.

When you come downstairs, the mover's Pokémon have left, and your mother calls your over to the TV, stating that your father is on the news. However, the program unfortunately ends as soon as you come over. Your mother will tell you to talk about how one of your dad's friends who also lives in Littleroot Town, and he's called Professor Birch. Y'know, the person who helped you choose your name and gender? She also states that he lives right next door, in the opposite house to you, and that you should go and meet him.

Once that is over and done with, there's nothing left but to head out into the outside! 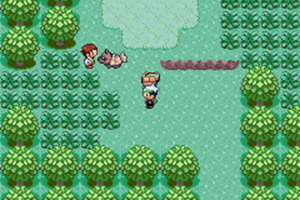 Upon entering the neighbour's house, you will be greeted by a woman. She mentions that she has a daughter (if your character is male) or a son (if your character is female), and that you should meet them upstairs. In Pokémon Emerald only, there is also a small child sitting at the table, who you can talk to for some dialogue about the child's older sister/brother.

In Pokémon Ruby and Sapphire, the elder child can be found sitting at their own PC upstairs, where they can be interacted with. In Pokémon Emerald, however, there are two ways to interact with the child. You can either head upstairs and click

while facing towards the item in the middle of the room, or you can enter and then immediately exit the upper room. Either way, the elder child will greet you, and the interaction begins.

If your character is male, the child will be using the female player sprite, and will be called May. If you're female, the male player sprite is used, and he is called Brendan. Brendan/May then talks about his/her dreams and aspirations, and mentions that his/her father is Professor Birch. He/she then runs off, after remembering that he/she was meant to be helping his/her father with Pokémon research. This person will become the first of your two rivals.

After the brief introduction, exit back into the town and head North to Route 101. Here, you will meet Professor Birch, but he's being chased by a wild Pokémon! His bag has fallen nearby. Clicking

when directly against it will open it, and reveal the three starter Pokémon in their Pokéballs: Treecko, a grass type, Mudkip, a water type, and Torchic, a fire type.

As with previous Pokémon versions, choosing Treecko can be considered easy mode, as grass type is effective in the first Pokémon Gym, and most of the region as a whole. Treecko is also the second grass type starter to have no secondary type in any of its evolutions, unlike Bulbasaur. Mudkip can be considered the intermediate experience, as its water (and later, Water/Ground) type makes it very effective against most of the early game gyms, and its final evolution, Swampert, is one of the strongest Pokémon in the game. Torchic can be considered "hard mode", facing many disadvantages throughout the region (particularly against the first gym). However, upon evolving, the Pokémon gains the dual type of fire/fighting, making it extremely useful in the late game.

Select one of the three Pokémon will trigger a battle with the wild Pokémon attacking Professor Birch, a level 2 Poochyena in Pokémon Ruby and Pokémon Sapphire, and a level 2 Zigzagoon in Pokémon Emerald. After saving the Professor, he will thank you for saving him, and both of you are warped to the 3rd and final building in Littleroot Town: the Professor's Lab.

Once you're inside the lab, Professor Birch will begin talking about how he's heard about you from your father. He also notices that your skill in the previous battle was surprisingly good, considering this is your first time using a Pokémon. As thanks for saving him earlier, he lets you keep the Pokémon you chose, and even lets you give it a nickname! After doing so, he tells you that you have potential to become even better, and mentions that your rival is on Route 103 hunting for wild Pokémon. He then asks if you want to meet your rival, and you can answer with either Yes or No, though he doesn't take the latter as an answer.

After all that, it's time to head out to Route 101 and beyond!