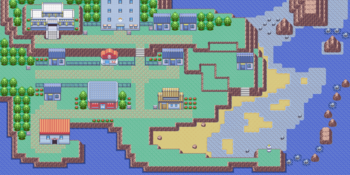 Despite the lack of a Pokémon Gym in Lilycove, the city still probably has more places of interest than any other location in Hoenn. In fact, more NPCs live here than anywhere else in the region, making it the de facto regional Capital.

First things first, let's talk about the Contest Hall. In Ruby and Sapphire, this Contest Hall holds the highest rank of all contest halls in Hoenn - the Master Rank. In Emerald, it is actually the only contest hall in the region, and so hosts all ranks (the other halls were replaced by Battle Tents).

It can be found in the south of the city, below the Pokémon Center and west of the Cove Lily Motel. Due to the prestigious nature of the Hall, a lot of Lilycove residents are proud of having it at their doorstep. As for what's inside, there's four Berry Blenders for making Pokéblocks, as well as photo frames for winning Pokémon, painted by a skilled artist.

The player can even get their Pokémon painted by the artist, if they win the Master rank competition and score at least 800 points, where it can then be found in Lilycove Museum. See the section on the museum for more details. 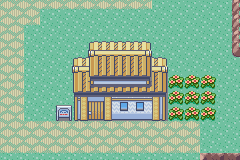 The Cove Lily is a local motel in Lilycove City, located east of the Contest Hall. In Pokémon Emerald, Scott can be found here napping (though only before Team Aqua steals the submarine in Slateport City). Unfortunately, due to the fact that Team Aqua/Magma has set up shop outside Lilycove, the motel has been starved of customers, and is completely empty when the player visits it. However, after defeating the Hoenn Pokémon League, GameFreak staff can be found there - specifically, the Graphic Artist, Programmer, and Game Designer. The latter of those three will give the player the Poké Diploma upon completing the Hoenn Pokédex.

Found in the north of the city, Lilycove Museum is home to paintings and statues alike, from any era. The ground floor houses statues (including a few replicas of real life statues), and a few paintings. It is here that classical artwork of Pokémon is displayed.

The 1st floor the special exhibit hall. It is here that your paintings from the contest hall will be displayed, and each painting will bring more people to the floor. Once 5 paintings have been collected (one for each Contest category), the floor's curator will gift the player a Glass Ornament to be used for their Secret Base.

The wharf here is a large building near the sea on the southernmost extent of the city's headland, southwest of the Contest Hall. It is here that the player can catch the S.S. Tidal and travel to Slateport City and either the Battle Tower if in Ruby & Sapphire or the Battle Frontier if in Emerald. 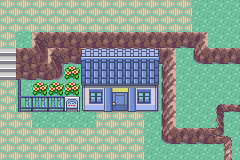 The fan club in Emerald

Found east of the Pokémon Center, Fans gather here to discuss popular Pokémon Trainers, Gym Leaders, and Hall of Fame participants. In fact, after the player becomes Hoenn's Champion, several members of the club announce themselves as fans of them. Some NPC characters the members are fans of include Norman, Glacia, Steven, and also the most recent people the player has mixed records with (see this link for details).

In order to increase or decrease the amount of members that are fans of the player, one must win or lose Link Battles with other people (two GameBoy Advances, two game cartridges, and one link cable are required).

The Move Deleter, east of the Lilycove Department Store, is the only one of his profession in Hoenn, and can be used to delete moves that can't be replaced by learning new moves. His services are completely free too, thanks to him always forgetting about you and assuming you're a new person every time. The only other place in Hoenn that allows your Pokémon to forget HM moves (e.g. Cut or Dive) is the Day Care near Mauville City. 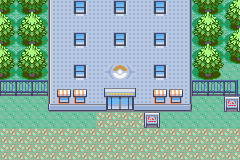 The store in Ruby & Sapphire

Now, you're probably wondering why Lilycove's PokéMart hasn't been mentioned yet. That is because it doesn't have one - instead, it has Lilycove Department Store, the largest store and one of the tallest buildings in Hoenn. Thanks the sheer size of its 6 floors (including the rooftop and the ground floor), it is more than deserving of its own section on the page. Note that the floors share the same design across all 3 games.

The ground floor contains two receptionists; the one on the left welcomes visitors, while the one on the right hosts the Pokémon Lottery Corner, with the winning number changing daily. In order to win, the number the player pulls must match any of the player's Pokémon's ID numbers, from the last digit to the first one. The prizes are as follows:

The 1st floor caters to the basic needs of any Pokémon Trainer - potions, pokéballs, repels, etc. The cashier on the left sells Pokéballs and Heals, while the cashier on the right sells Potions and Repels. This is also the first time you can get a Max Potion , which heals your Pokémon to max health regardless of how much it currently has.

The 4th floor sells furniture for secret bases. The cashiers below are numbered from left to right. 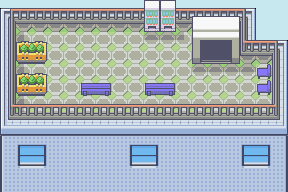 The rooftop has a couple of vending machines you can buy drinks from, and not much else. Though if you return after defeating the Elite Four, then there is a rare chance for the Department Store to hold a rooftop sale here. Many of the items here are exclusive to this sale, so make sure to check here regularly after becoming the champ!

In the northeastern part of the city, you can find a Gentleman who will give you a random berry every day, from the following:

The following items can be found in the contest hall:

When you go near the Department Store, Brendan/May will come out to you for a battle. This is is the final battle against them in the game, and they'll return to Littleroot Town after your defeat them. This is also when they're at their strongest, so be ready!

All of your rival's Pokémon are over level 30 at this point, but not quite so high enough for them to have a final evolution starter. They will always have a Swellow, so let's start with that.

Swellow is level 31, and holds the ability Guts, which increases it's Attack by 50% if afflicted with a status condition (this negates the lowering effects of Burn). As for moves, it has Quick Attack, Wing Attack, Endeavor, and Double Team.

If the rival doesn't have Grovyle, then Shroomish is their grass type, at level 32. Its ability is Effect Spore, which has a 10% chance that the attacking Pokémon will be poisoned, paralyzed, or fallen asleep, but only if the enemy uses a move that makes contact with Shroomish. For moves, it has Headbutt, Poison Powder, Leech Seed, and Mega Drain.

If your rival doesn't have Marshtomp, then they'll have Wailmer. At level 32, it holds the ability Water Veil, which instantly heals the Pokémon of any Burn status condition. As for moves, Wailmer has Mist, Astonish, Water Pulse, and Whirlpool.

And if your rival doesn't have Combusken, then they'll have Numel. At level 32, it holds the ability Oblivious, which negates the affects of any Pokémon that tries to infatuate it. Its moves are Amnesia, Magnitude, Focus Energy, and Take Down.

As for their starters, all are level 34, and all have some ability that increases the power of moves that are their main type by 50% if they are under 33% health remaining (Blaze, Torrent, and Overgrow). As for moves, they are as follows:

Combusken has the moves Double Kick, Bulk Up, Sand Attack, and Peck.
Marshtomp has the moves Mud Shot, Mud Sport, Foresight, and Take Down.
Grovyle has the moves Leaf Blade, Screech, Fury Cutter, and Pursuit.

In Pokémon Emerald, the rival's team is almost complete different. The Only exception is the starters, who are the same as in Pokémon Ruby & Sapphire, so they won't be covered again.

Swellow has instead been replaced by Tropius, at level 31. Its ability is Chlorophyll, which heals Tropius if the arena is sunny. For moves, it has Stomp, Sweet Scent, Whirlwind, and Magical Leaf.

Shroomish has been replaced with Ludicolo, at level 32. Its ability is Swift Swim, which doubles the Speed stat of Ludicolo while its raining. Its moves are Astonish, Growl, Absorb, and Nature Power.

Wailmer has been replaced with Pelipper, at level 32. Its ability is Keen Eye, which prevents accuracy loss. As for moves, it has Wing Attack, Supersonic, Mist, and Protect.

Numel has been replaced by Slugma, at level 32. Its ability is Magma Armor, which negates any and all freezing effects on Slugma. Its moves are Ember, Rock Throw, Harden, and Amnesia.