Ecruteak City once had two towers, but one burned down in a mysterious fire. There is a story that says the remaining structure, the Tin Tower, is visited by a Legendary Pokémon. You will meet Bill, whose PC storage system you use to keep your Pokémon safe, in Ecruteak. 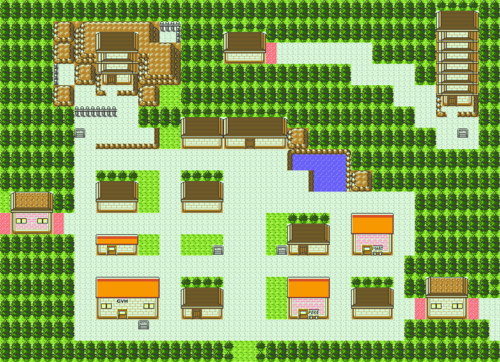 The Time Capsule is fixed[edit]

You'll find Bill waiting for you in Ecruteak City's Pokémon Center, and all the news is good. They've managed to repair the Time Capsule on the second floor, which lets you trade Pokémon between Gold/Silver/Crystal and your old Red/Blue/Yellow games. The machine will be up and running tomorrow (the day after you meet Bill), but there's plenty to do in Ecruteak City in the meantime. Or you could always follow Bill back to his home in Goldenrod City for a free Eevee! Note that this Eevee will be level 20. This means it will not be able to get any of its evolutions' first elemental moves (Thundershock, Water Gun, or Ember) which are learned at level 16.

Crystal only
In Crystal, you must visit the Burned Tower before you can challenge Morty for the Fog Badge.

They say Ho-Oh left when the tower burned down, but there may still be some Legends about. If you need EXP, you can explore this area, before you challenge the Gym. Make sure you heal your Pokémon before you enter the Burned Tower. Just before you enter the Tower, you will meet up with your Rival, who has a much bigger team of Pokémon to challenge you with.

You won't be able to enter the Tin Tower until you have the Fog Badge from Ecruteak's Gym. You also need the Rainbow Wing (or the Clear Bell in Crystal) which you won't get until later on.

The man in the small house to the left of the Pokémon Center will give you the classic Item Finder. When you use it (it's a good idea to assign it to

) you'll be able to hear from the beeps if there are any hidden items nearby. Try it near the pond in the middle of the city for a Hyper Potion.

Battle at the Dance Hall for HM 03[edit] 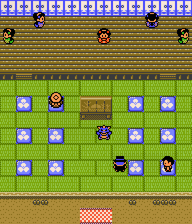 The five Kimono Girls battle with five evolutions of Eevee. If you defeat the five dancers on the Dance Hall stage (each has a different Eevee form), one of the spectators will give you HM 03, Surf, an item you will need to continue your journey. The Kimono Girls are very good Trainers, and their Eevee evolutions are very tough, but you can go heal between fights. It is recommended to complete this task first if you are using a Water Pokémon because Surf is among the best moves they can learn and will make your battles easier from here on out. 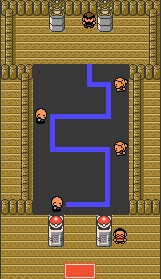 The Ecruteak City Gym is full of pitfalls that send you back to the beginning. The floor will knock you back to the start unless you follow the path marked in blue to make it to the Gym Trainers and Leader. Stay in line with the Trainers when you're moving horizontally. Of course, then you won't be able to avoid them, but that may be for the best. Many of the Pokémon are using a new attack, Mean Look, which makes it impossible for you to switch your active Pokémon, so try to defeat the Trainers quickly before you're trapped. Morty is a tough opponent, and you need all the practice you can get.

There are a couple of ways to handle this gym. One is to come in with powerful Psychics (since all these Ghosts are part Poison) and try to K.O. them quickly. Kadabra is fast, so a high-level one can do a lot of damage (however, watch out for Gengar's Shadow Ball, which is super-effective against Psychic types). Another is to exploit the Normal-type resistance to Ghost by teaching a straight Normal Pokémon (like Sentret) a non-Normal attack, like Surf or Dig. Most of the Ghosts won't be able to hurt it, except by using Curse, an attack that usually backfires (it costs the user ½ of its HP) and that you can easily get around by swapping out your Pokémon (unless you were hit with Mean Look). Also, Dark-type attacks work great here, so use Pokémon with moves like Bite and Pursuit. You can also use the Machop from before, at level 25 it learns foresight. It looks like a useless move, but it can be useful against ghost pokemon. When you use foresight, the Machop can hit the ghost pokemon with his fighting attacks, which wouldn't work without otherwise.

Beware of Gengar's Dream Eater / Hypnosis combo! It can and will be a difficult fight without Awakening; The most powerful one of the lot seems to be the only user of this deadly tirade, though.

Defeat Morty to claim ownership of the Fog Badge. The Fog Badge allows you to use Surf outside of battle, which is crucial at this stage. You will also earn TM 30, which will teach the move Shadow Ball to one of your Pokémon.