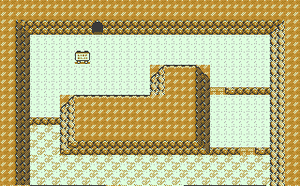 The Power Plant is right on the other side of this small tunnel, just north of Lavender.

The Rock Tunnel will get you from Lavender Town to Route 10. It is neither complex nor large, so you shouldn't have trouble picking up all the items inside and finding your way out. Make sure you pick up TM 47, Steel Wing, when you first enter the tunnel.

The Rock Tunnel is a simple dungeon with a few interesting items (like TM 47 which contains Steel Wing, a rare Steel-type attack). It's also the only place you'll find Kangaskhan and wild Cubone.

First floor of the Rock Tunnel

From the bottom entrance (Lavender), go up and grab the Elixer on the left, then climb up the stairs onto the raised area and grab the TM 47 (Steel Wing). Return to dirt floor and head to the far right until you reach the wall, then go up and climb down the ladder to Floor 2 (lower-right).

From the ladder (center) head left, go up, and climb down the ladder in the northwest corner (upper-left).

Second floor of the Rock Tunnel

From the ladder (upper-right) head a bit to the right and then down. Half way down the map you will zigzag to the left and down. At the fork, take a left to get an Iron/Calcium. Return to the right and climb up the final ladder (lower-right).