The dark, gloomy forest is very large and confusing. After you help the Apprentice, you can explore the forest to find TM 02, Headbutt, which can shake Pokémon out of trees. The girl in the guard house will give you TM 12, Sweet Scent, which can attract more Pokémon to you. 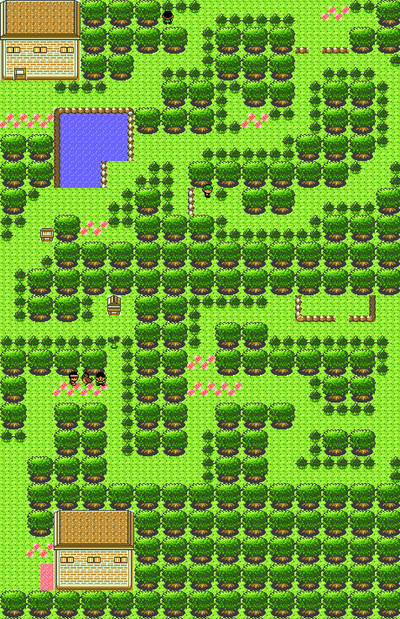 The charcoal maker, who lives in Azalea Town's south-east, hasn't seen his apprentice since he went into the forest. You'll find him safe, but his Farfetch'd is lost. Farfetch'd is in the middle of the forest, but when you approach it, it runs away. So you'll need to loop around and come at it from behind, chasing it right into the apprentice's arms!

The charcoal maker will give you HM01 (Cut)

The charcoal maker will show up and reward you with HM 01, Cut, which when learned by a Pokémon in your party, allows you to cut trees like the tree at the top of the path that is blocking your way up to Route #34. If you go back to Azalea town and into the charcoal makers house, the apprentice will give you Charcoal. If you give it to a Pokémon to hold, it will power up all of its Fire-type techniques.

You have to go a bit out of your way to get to a man who waits east of the forest pond, but it's an opportunity you won't want to miss. He gives you TM 02, Headbutt. This is a useful attack, and it's also the key to getting four Pokémon you wouldn't be able to get any other way! Keep reading for details.

Catching Pokémon with the art of the Headbutt[edit]

In battle, Headbutt has a power of 70 and makes opponents Flinch 30% of the time. That's a great attack, but Headbutt is even better on the field! Whenever you see one of the smaller trees, you can use Headbutt to hit it, possibly knocking out a Pokémon!

Some trees are considered 'rare' and have a higher chance of encountering hard-to-find Pokémon such as Heracross and Aipom. Rare trees are determined by your Trainer Id, so use a tool like tshadowshight's headbutt grid to determine what trees are rare for your game.

Look at the headbutt tables for drop rates in various areas. Many nearby routes have the same encounter table so if you don't find a headbutt table in a specific area, you can assume that an earlier table is applicable unless otherwise specified.

In Ilex Forest, it will be a high chance that a member of the Caterpie or Weedle family falls out (depending on your version), or possibly a Exeggcute with a 15% chance in Gold and Silver or Pineco in Crystal.

Other Pokémon that you can catch in other areas of Johto include Noctowl, Heracross, Ledyba, Spinarak, Ekans, Exeggcute, and Hoothoot. Headbutting trees in Azalea town (Crystal Version only) is one way to get the extremely rare Aipom. In Gold/Silver, they can be found in the trees on Route 33 (east exit from Azalea/South exit from Union Cave). You can also get Aipom on Route 44 by headbutting trees. Aipom has a high attack stat, so it's good in battle.

Return later on, and surf for Psyduck[edit]

If you Surf in Ilex Forest until you're attacked, you'll encounter an elusive Psyduck (the evolved form Golduck may also appear). Crystal players dont have to rely on Surfing if they wait until night time to go Psyduck hunting as they appear in the tall grass 10% of the time. You can also catch these Water Pokémon by Surfing near Route 35.

Goldenrod is the biggest city in Johto, and there's a ton of things to do there. You can breed Pokémon at the nearby Day-Care, gamble for prizes at the Game Corner, shop at the Department Store, get a bike, visit the Radio Station... And, of course, challenge Whitney for the Plain Badge. You must travel across one route to reach it, Route #34.