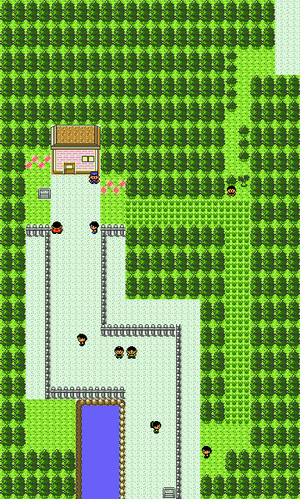 Prepare for a Yanma swarm[edit]

Route #35 is the sole habitat of the Yanma Pokémon. Catching one now is tough, since they only appear in significant numbers when they swarm (Nidoran also appear during Yanma swarms in Crystal). Trade phone numbers with Arnie, and he'll give you a ring when that happens. Then continue on to TM 04 (Rollout).

Like the guard back in Route #34, the guard outside of the National Park gatehouse will attack anyone who passes by at night. Once again, it seems clear that Growlithe are the Pokémon of choice for law enforcement personnel.

Talk to the guard in the building between Goldenrod City and this Route. He will ask you to carry a Pokémon that's holding mail to his friend on Route #31 just outside of Violet City. The friend will reward you for your efforts. After you finish the errand, come back to the guard house and the guard will give you HP Up. (However, if you'd like to keep that Pokémon, catch any wild Pokémon and transfer the mail from the Pokémon that he gave you, to the Pokémon that you caught. The guard's friend will accept it as long as the mail is present.)

The Mystery of the Mysteryberry[edit]

You won't be able to reach the Mysteryberry to the left of the pond just yet, but once you can use Surf ouside of battle, Surf over the water to pick up a Mysteryberry.