Route 26 and 27 are a little confusing, but they lead the way to Victory Road, so you'll have to get through them. You should bring along Pokémon that know Waterfall and Surf for the trip. Make sure your Pokémon are strong, healthy and attached to you before you leave for Kanto.

Back in his New Bark Town laboratory, Professor Elm rewards your achievement with a free Master Ball. This powerful item can catch any Pokémon without fail, but the only way to get another one is by getting a perfect match in the Goldenrod Lottery, which hardly ever happens. In other words, use Elm's present wisely. When your business there is done, Surf to the east for Route 27. 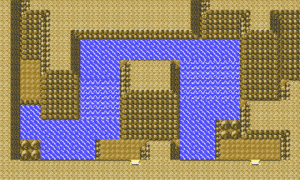 The woman in the house will check to see how devoted your Pokémon are to you. Is she sees that the first Pokémon in your party is attached to you, she will give you TM 37 (Sand Storm), which damages both Pokémon every turn, but is ineffective against Rock, Ground, and Steel-types. So teach it to one of those. Pokémon become attached to Trainers when they are:

If you treat your Pokémon well, they will treat you well, too.

Getting through this small cave will require a Pokémon with the Waterfall move. Don't miss an all-too-rare Moon Stone to the left of the entrance. Bring a Pokémon with Whirlpool, too, so you can get TM 22 (Solar Beam) on the other side of the cave.

The small lower left house is home to all seven of the Day Siblings that you've run into throughout Johto. No one's home, but the notebook on top of the table contains the Day Siblings' oath, which includes information about where and when each sibling appears in Johto. It's a good place to check if you've missed a few siblings the first time around.

You can heal here[edit]

This is the longest stretch of field in the game, and the trainers aren't easy. Fortunately, the woman in the upper right house will heal your Pokémon if they are tired and weak from all of the Trainer battles.

After a very long journey that including surfing, battling and much item collecting, you will finally be on your way to Victory Road/. The gatekeeper here at the top of Route 46 won't let you pass unless you have all eight Badges from Johto. Two men are blocking the paths that branch out to the left and the right. They won't be gone for a while. Just press ahead and worry about the two blocked paths later. You need more experience before you will be able to tackle the road to the left, anyway. The path only gets harder from here, so make sure to save and heal before you set foot on Victory Road.