Cherrygrove City has a Pokémon Mart and a Pokémon Center, but it doesn't have a Gym. You will have to battle in this city, however, so try to battle as many wild Pokémon as possible to build up your starting Pokémon and make it fighting fit. 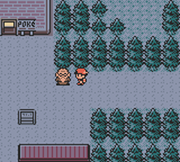 This old man will show you around town.

The old man who greets you at the entrance to the city will offer to "teach you a few things." It may seem like a small town, but politely agree whether you're interested or not. After the nice older gentleman is finished showing you the sights, he'll give you the handy Map Card for your PokéGear when the guided tour is over. Now you can view the World Map at any time. To use the map, hit

, select Pokégear from the menu, then choose the Map icon.

You'll definitely want to stop at the Pokémon Center to get your Pokémon healed up for the journey ahead. If you have never been to a Pokémon Center before, you're in for a treat. Pokémon Centers are located in nearly every town, and they are a great resource for Pokémon Trainers of all skill levels. You can ask the nurse at the desk to heal your Pokémon back to perfect health and you can use the PC there to access your PC, where you store your items, and Bill's PC where you store your Pokémon. But all of this Pokémon Center's other functions (like trading with your friends) are currently under adjustment. They won't become available until you've finished your errand for Professor Elm.

The second floor of every Pokémon Center has several areas that you won't be able to use until you've finished your errand for Professor Elm. The first area is the Cable Club Trade Center, where you can use the Game Link Cable to trade Pokémon with a friend who has Pokémon Gold, Silver, or Crystal. The second is the Cable Club Battle Center, where you can battle with a friend who has Pokémon GSC or Pokémon RBY. 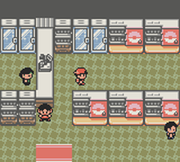 The shop next door can sell you some useful supplies, but is currently sold out of Poké Balls. The Pokémon Mart is a good place to stock up on items that you need to become a great Pokémon Trainer. You'll have to come back and stock up after you've finished Professor Elm's errand. You can purchase other goods, however, if you wish to spend your money.

Buy some potions in case your Pokemon is low life. If you're playing Silver or Crystal, purchase some antidotes for the upcoming poison-type Pokémon you will face.

After you've successfully completed Elm's errand, you can go back to the Pokémon Mart and purchase as many Poké Balls as you can afford. You must use the Poké Balls to catch Pokémon in the wild to bulk up your traveling party.

Return later on when you have Surf[edit]

Once you have Surf and Fly, return to this city and Surf over to the small island in the middle of the bay. The guy there will give you a free Mystic Water item, no strings attached. When equipped, it will power up your Pokémon's Water-type attacks.