You will run into a number of oddities and road blocks when you first wander into Mahogany Town. You won't be able to enter the Gym or Route 44. The Pokémon Mart is selling really strange items, and there's a rumor that a red Gyrados has appeared at the Lake of Rage. 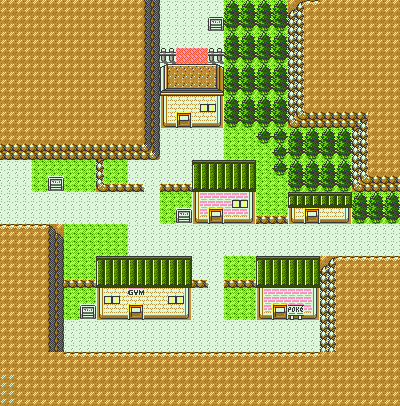 Something's wrong in Mahogany, and it shouldn't take three guesses to figure out who's to blame. Team Rocket has the Gym blocked, and the path to Route 44 shut down. The guy who blocks your way will offer to sell you a Ragecandybar for

300. Ragecandybars heal 20HP, just like a standard Potion, except that it may also improve your Pokémon's happiness as well.

No matter how many you buy, the guy won't let you pass. He won't leave until you defeat Mahogany Town's Gym Leader and solve the Goldenrod Radio Station dilemma. That leaves you no choice but to head north to Route 43 and the Lake of Rage.

Instead of the usual staples, the item shop in town sells odd items like Tinymushrooms and Slowpoketails. Both of these items have no real use (they can be resold for the same price), and the shop will revert to a normal store when all of this Team Rocket madness has been cleared up.

This gym is unavailable to you until after you've visited the Lake of Rage, and returned with Lance to clear out the Team Rocket Hideout and run them out of town. 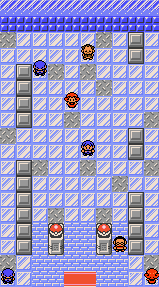 You'll go sliding all the way to the opposite wall when you set foot on a block of ice, so even getting to the master of this gym can be tricky. In order to get to Pryce, or any of the Junior Trainers, you will have to skate your way through a labyrinth. Once you walk on to the floor, there are only two ways to stop; land on one of the metal tiles, or run into a wall.

Of course there are ways to avoid fighting all trainers, but since ice is an element you haven't really battled against, it's a good idea to fight them anyways. The battles provide a lot of money and good experience points. Just remember to save often.

Ice is a pretty easy Type to deal with, but some of their secondary types can make things tricky. Fire and Fighting are still good, but with so many Water-types, Ice's vulnerability to Rock is hard to exploit. Electric Pokémon are a better pick, although Fire-types benefit from their ability to immediately unfreeze when frozen. If you did not start off with Cyndaquil, hopefully you've picked up a Growlithe on Routes 36 or 37. If you don't have a full fledged army of Fire- or Electric-types, a few good Grass-types are helpful as well.

After defeating Pryce he will give you Glacier Badge (which permits you to use the power of HM 06, Whirlpool) and TM 16 (Icy Wind). Icy Wind inflicts damage and then lowers the target's Speed stat by one stage. It will hit both opposing Pokémon in a double battle.

Only one badge remains, but it will have to wait; Professor Elm has received word of an emergency at the Goldenrod City Radio Tower, and that's going to have to be your first priority. When that's finally settled, you'll head to secluded Blackthorn City in Johto's far East to fight for the Rising Badge.