Routes 38 and 39 branch off in many places, and quite a few Trainers are hanging out on the two roads. They're using Flying-, Electric-, Grass- and Water-type Pokémon, among others. Moomoo Farm is along the way, and one of its Miltank is ill. You might want to help it out.

Trade phone numbers with Schoolboy Chad, and wait for his call. When you get it, come back and catch your Snubbull because the odds of catching one without it are dismal.

Dana gives you a free Lightning Stone
Since Snubbull don't swarm anymore in Crystal, that won't be of much use. However, if you trade numbers with Dana instead, sooner or later, she'll call up and give you a Thunderstone. You can use that to turn your Eevee into a Jolteon, giving you one of the best Electric Pokémon in the game. If you don't want to use up your Eevee (or the Thunderstone), make sure to catch a Magnemite. You'll need a good Electric Pokémon soon.

*Snubbull encounter rate during swarms is much higher. 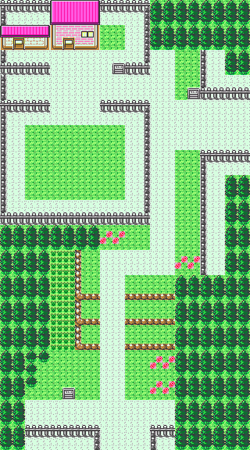 Save the Miltank for TM 13 and cheap milk[edit]

The Miltank in this barn is sick, and only feeding it a bunch of Berries (around seven) will save it. There's a Berry tree nearby, but it may take you a few days to accumulate that many from just that tree, so you may want to do some backtracking or dip into your personal inventory. If you saved all of your Berries from the beginning of the quest, now is the time to use them.

The ranchers will thank you with TM 13 (Snore), an attack which only works while you're asleep), and begin selling Moomoo Milk (which heals 100 HP outside of battle) for

500. It's pretty useful, but since the ranchers can only spare one bottle, you can only get one serving at a time. You'll have to bring the empty bottle back when you want to buy more.