Route #34 falls between Ilex Forest and Goldenrod City. Near the top of the path is the Pokémon Daycare. Get in the water with Surf and head south to a hidden area where there is 3 girl trainers who which once beaten will give you the hold item Soft Sand. This will boost the power of Ground-type techniques. 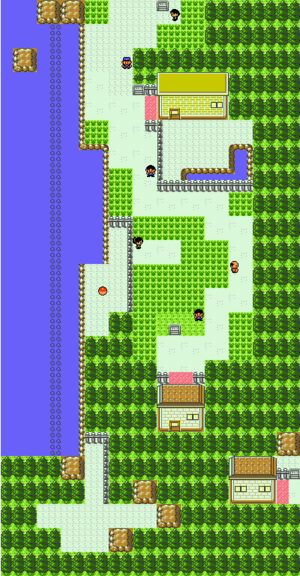 The lady with the Butterfree behind the counter will give you a free TM 12 when you complete Ilex Forest. This move makes it harder for opponents to dodge in battle (which is fairly pointless), and can be used out of battle to lure a wild Pokémon into a battle with you (but only in areas where Pokémon naturally occur).

Difficult to catch, but well worth the trouble[edit]

This area is full of interesting Pokémon in Crystal including Snubbull and Jigglypuff and common Pidgey. In Gold or Silver, Drowzee are the most common, and you may want to snag a pair since someone in Goldenrod City will trade you a Machop for one. In Crystal, you must trade an Abra for Machop instead. There are Abra around in the area, available day and night. But they always Teleport away immediately. That's where Gastly comes in use as its Mean Look will prevent Abra from going anywhere, unless you want to try and put Abra to sleep, which does work most of the time.

Make sure to snag some Ditto, too; their ability to breed with anything makes them one of the game's most useful Pokémon. Available day and night, it can be frustrating trying to battle it as it matches the type your the current Pokémon. Switch Pokémon and it usually does not change again.

The Skittish Guard attacks at night[edit]

The guard shortly before Goldenrod City is so concerned about crime that he attacks anything that moves at night… Even you! But if you can handle his Level 17 (!) Growlithe, you can earn a couple bucks by beating him.

Trade numbers with Todd and Gina
In Crystal, junior trainers have all sorts of useful things to say. If you give Todd your number after beating him in combat, he'll give you a call whenever the Goldenrod Department Store is having one of its rooftop sales. Gina gives you something even better when she calls back: A Leaf Stone.

Breed Pokémon at the Day-Care[edit]

This nondescript building is one of the most important areas in the game. You can leave up two Pokémon in the care of the Daycare Man and Lady. If you leave a Pokémon here, it will gain one EXP for every step you take. But if you leave both a male and a female, you may return to find that they've laid an egg. Return to the Daycare a few hours after you drop off a pair to see if an egg has appeared. Keep that egg in your party, and it will hatch, like Togepi. Breeding Pokémon like this is the only way to get more of certain Pokémon (like Eevee) and to get new pre-evolved Pokémon like Pichu.

If you don't have a breeding pair, a similar Pokémon may suffice, or you can use a Ditto. They won't always mate, but it's worth a try. If they're going to, it won't take long, but you can save time by looking at the Pokémon in the pen. If it says that they seem interested in each other, expect an egg. Check out the Breeding section for details.

Get an abandoned baby Pokémon Egg
In Crystal, you'll be given an Odd Egg the first time you visit. This egg, which will hatch as normal, contains a random pre-evolved Pokémon: Pichu, Cleffa, Igglybuff, Smoochum, Elekid, Tyrogue, or Magby. The real advantage to a Pokémon from this egg is that you have a 50% (Japanese version) and 14% (US version) chance of it being a Shiny, and they all know the move Dizzy Punch, which can confuse your opponents! Don't miss this opportunity to get a great Pokémon early!

The egg Professor Elm gave you hatches based on the number of steps taken. If you've made it this far, it probably already has. If not, check the egg's stats: The message there will give you an indication of how far along it is. When it does, congratulations—you have a Togepi Later, bring the Togepi to Professor Elm in his lab to get an Everstone.

Return later on to defeat the Elite Trio[edit]

After you have learned surf, go to the water in the left side of the route. First surf down to the area behind the fence, there is a nugget and a piece of rare candy hidden in the top of the tree closest to the nugget. If you surf further down, you'll come across these three elite trainers. There's no pause to heal between the first two fights, so come prepared: Good Electric Pokémon like Chinchou and Grass Pokémon like Sunflora are a must here. After you have defeated them all, talk to the oldest sister (in the bottom) and you will receive the Soft Sand that powers up Ground-type attacks.