Route 24 and Route 25 aren't that long, but there is a lot to see and do there. You'll have plenty of battles to fight, a machine part to track down, and a Gym Leader to find. 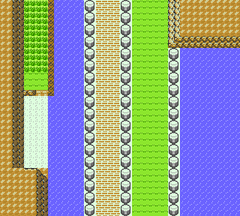 Along the bridge, you'll come to a poor odd fellow who's a member of Team Rocket—but Team Rocket is no more! He hasn't gotten the news of Team Rocket's demise yet, so you'll have to put him in his place. After you defeat him, he will tell you where he hid the missing machine part, so you can retrieve it and fix the generator at the Power Plant.

Defeat all of the trainers along Route 25, and the last Trainer will reward you with a Nugget... and one more fight. It's tough, so be ready.

After you've confronted the odd man and retrieved the machine part, head back up to the docks, where Misty has gone on a date. She'll go back to the Gym once you've interrupted her romantic stroll along the water, and she'll be ready to fight!