Star Wars Knights of the Old Republic II: The Sith Lords/Master of the Palace 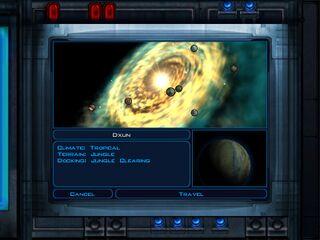 Dxun on the Galaxy Map

When you return to the Ebon Hawk after leaving Dxun and finding a Lost Jedi on another world, or after already finding the other three elsewhere, T3-M4 has a message from Kelborn:

Save game before entering the Mandalorian ruins on Dxun again: you'll be choosing a party there which must be led by one of the Handmaiden or Disciple, Mira, Visas or Atton, and another led by you with Kreia, but you won't be able to prepare any of them once you enter the ruins.

Kelborn awaits you in the command center. If you're helping Queen Talia, and received word of an urgent message from Master Kavar:

If you're helping General Vaklu, and received word of an urgent message from Colonel Tobin:

While your main character's experience level is still used for autobalance calculations (although you recieve no experience whatsoever when not in the party), the party leader you select now determines Player Charisma Modifier added to the rest of the party's attack rolls, their character level determines experience received from skill use, and their Repair rank determines how many components you receive if you break down items at a Workbench.