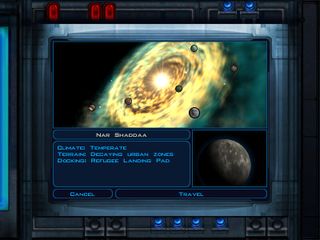 Nar Shaddaa on the Galaxy Map

After leaving hyperspace, your party gathers in the main hold of the Ebon Hawk:

Meanwhile, the Exchange boss Goto addresses a motley crew aboard his yacht:

Your party has disembarked from the Ebon Hawk in the Refugee Landing Pad:

If Atton hasn't already said you should get the Ebon Hawk's ID signature changed while you're here after you comment on it looking a little exposed, he does so now:

You can enter Tienn Tubb's Shop in the bottom left quarter of the landing pad and ask Tienn Tubb if he can change a ship's ID transponder codes, but you cannot get the transponder card required for him to do so until you've done enough on Nar Shaddaa to gain the attention of Visquis of the Exchange.

As you might be coming to expect, Atton's wrong about no one supervising these landing pads anymore, as you're approached by Quello, the landing pad master:

You move closer to the dark side of the Force if you try to persuade him that the Hutts or the Exchange told you you could land here, even if you fail, but you only receive experience if you succeed:

If you fail to persuade him you were told you could land here, or you're unwilling to move closer to the dark side of the Force, it's easier to persuade him if you offer to pay for the space (although it's not necessary to pay him then and there, so don't):

If all else fails, the following is the quickest and easiest way to end this dialog:

If you try to speak to Quello again before he leaves:

You can only complete this Landing Rights quest after entering and exiting the Refugee Quad in the bottom wall of the landing pad.