If you need help with wiki markup, see the wiki markup page. If you want to try out wiki markup without damaging a page, why not use the sandbox?
Cleanup required: Controls, formulae, external links, etc.

If you need help with wiki markup, see the wiki markup page. If you want to try out wiki markup without damaging a page, why not use the sandbox?
Cleanup required: Controls, formulae, external links, etc.

San Andreas adds the ability to rob houses. Contrary to what is often mentioned in reviews, it is not necessary to wear a balaclava or ski mask or any other form of disguise as cj dons one automatically when the mission is active.

In order to complete this mission CJ must steal $10,000 worth of goods, but this does not have to be in the same session. CJ can steal any number of items over several nights and eventually add up to the total. Only then will the player get the rewards. Despite what the official strategy guide says this mission is not required to get 100% Completion. 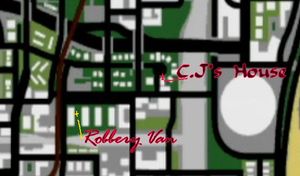 The Boxville near CJ's house.

Also see a map of the Boxville locations (requires Java).

This mission is only available at night, between 20:00-6:00 (8 PM to 6 AM) game time, 10 minutes real time. The indicator stating a mission can be activated will only appear when the clock hits 20:00. It is good strategy to get in the truck early, cruise out to a residential area and let the clock run down so you are in position.

to activate a Burglary mission.

The player should drive around until they see a marker on a house's front door. This indicates that particular house can be burgled. The neighborhoods south of the Boxville found near Sweet's house have many robbable homes.

It is expected that the player has already played through the Home Invasion mission, but here's a run-down; however, in the PC version, burglary is available as early as the very beginning of the game, before completing In The Beginning.

Pick up an item

and head out the door and back to the Boxville. Face the rear door of the Boxville and press the button again, and the item should be deposited within along with a confirmation message. If CJ drops it on the ground just pick it up again, readjust his position in relation to the back of the truck, and try again. With practise it is also possible to drop items through the sides of the rear of the truck to make parking easier and the trips back and forth shorter.

Return to the lockup in the Boxville before 11:00am. You have five minutes real-time (5 hours game-time) after 6:00am to get the truck back to the lockup, so you can steal right up to 6:00 am. Even if you have "item" in your hands, you can still drop it off. Otherwise after the five minutes any goods still inside the truck will be lost forever.

Basically, if it looks like it can be resold for profit, it can.

CJ can't crouch while carrying but can still use the sneak button, so it may be advisable to walk as slowly as possible to avoid filling up the noise bar.

An alternate option is to rush for the door heedless of the noise level, as exiting will make the noise bar empty and the owners (if roused) go back to bed. CJ can then re-enter and continue as before.

Gamers who wish the nights would last longer have a few options open to them.

All three versions of the game feature the "Orange Sky, Clock Fixed at 21:00" and "Always Midnight" cheat codes. Either of these will allow absolutely unlimited burglary time.

PC version owners wishing to have a longer (but still limited) amount of time in which to burgle each night can download the TimeSynch Tool, which synchronises the in-game clock with the Windows clock, allowing for burglary missions to stretch several real-world hours instead of a few minutes. The Tool can be disabled at any time to allow the clock to return to its normal speed of advancement.

There is a glitch on the Xbox version of San Andreas when performing the burglary missions. It is possible to go into a house, grab a TV, put it in the truck, return to the house to have it respawn again. The house is down the street from the Johnson's House in Ganton. Start at your house and head west until you reach the first intersection. Stop at the light. Look to your left. That is the house with the glitch. It is possible to go in, grab a radio right inside the entrance then put it in the truck, return in to find four gang members upon which, leave the house. Enter again and kill the four gang members, then leave again for the cops. Enter once more and grab the TV in the far corner of the room. After exiting, putting it in the truck and returning, it will have respawned. This is repeatable many times. It is possible to get many thousands of dollars worth of equipment in this manner; more than enough to ensure completion of the mission.

It is also possible to do this trick in a Los Venturas house. The house is in the very far south part of Redsands West, in the middle/east part. The black boxville in Venturas is right in the south-east part of Pilgrim, next to the garage.