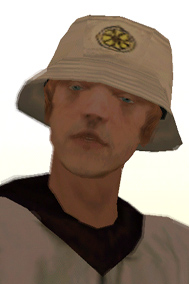 This mission actually starts outside the casino, the red mission marker is on the red carpet and can be hard to see if you are running around the corner from the last mission, it caught me out anyway. Your cell-phone will ring, it's the Truth, it seems that he has two friends lost in the desert and it's up to you to go and find them.

Once you reach the location and find Paul and Maccer you need to get your vehicle close enough to them to trigger them to get inside, they are not too hot at following on foot so be careful as a wrecked or overturned vehicle could result in fatalities and therefore mission failure as they will clamber out but probably not run away. Anyway, it seems that one of them can remember "lots of snakes" and CJ knows there is a Snake Farm somewhere locally (it's actually on the corner of the Verdant Meadows Airstrip) so that's where you head next. When you arrive, the locals aren't too pleased to see Paul and Maccer again so you have to head off rapidly towards Las Venturas with a couple of Walton Pickups in hot pursuit.

En-route to Las Venturas one of the dynamic duo recalls a casino name and that's where you head to, on arrival a cutscene shows the party entering the building to visit someone inside before you depart to complete the mission. Later you will get a call on your cell-phone from Paul to offer you work.

You are collecting two people so it helps if you have a car with four doors, also bear in mind they are lost in the desert so an off-roader would be handy, Landstalker anyone?

If possible, shoot the rednecks before running to the car, thus giving you a free run back without any pursuit.

Make use of the space at Verdant Meadows to deal with the pickups before heading back to Las Venturas, if you are suitably tooled-up you can dispose of them relatively easily, no point in making the return journey any more difficult than is absolutely necessary.

Alternatively, a Maverick helicopter works great for this mission since it has 4 doors.

You've had your Chips |