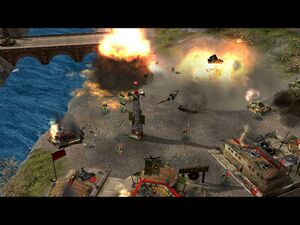 China forces are overrun by GLA at Three Gorges Dam.
IMPORTANT
Research Capture command. Send troops immediately west of base to capture oil derrick for much-needed funds.
SPECIAL STRATEGY HINT
Highlight all troops and then click on barracks. Only the wounded troops will report to barracks and heal.
SPECIAL STRATEGY HINT
Highlight all vehicles and click on weapons factory. Only damaged vehicles will report to the war factory. If the waypoint is set back to where you are presently positioned, the vehicles will automatically returned healed and ready for battle.

This is the first mission to present a real challenge to seasoned gamers. The mission starts with an immediate assault from the south.

SPECIAL STRATEGY HINT
Civilian structures do not always allow garrisoned troops to fire in all directions. Find a structure that is positioned in a way that allows a good defense.

Crossing the river will not be clean and neat. Think Normandy Beach. Think survival with a very high mortality rate.

The level can be passed without the dam destruction albeit difficultly, since even if you decide to spare the dam the GLA sends some scorpion tanks to destroy it anyway. To keep the real-life largest dam in the world for China do the following (speed is paramount):