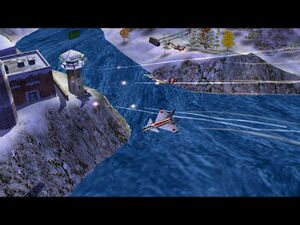 The air strike arrives only after Stinger sites have been destroyed.

There are a total of five Stinger sites that must be destroyed before an air strike can eliminate the Toxin facility. Black Lotus and Hackers assist on this mission, as Tank Hunters and Red Guard provide the needed firepower. Reinforcements will be dropped from the air at various points along the way. Vehicles cannot be built until a War Factory is captured midway in the mission.

Define Unit Assignments
Being able to quickly call upon units' specialized abilities is key to an easy victory for this mission. Instead of trying to sort things out in the heat of battle or attempt to locate a unit left behind, assign a number to a selected unit or group. This is done by selecting unit(s) and pressing Ctrl+(1 thru 9). 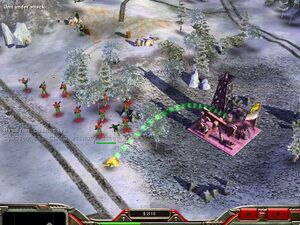 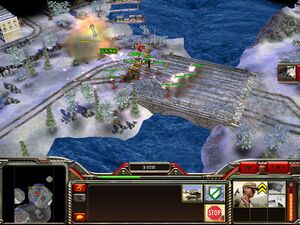 Black Lotus disables the toxin tractor, or use Cluster mines; then take out Stinger site. 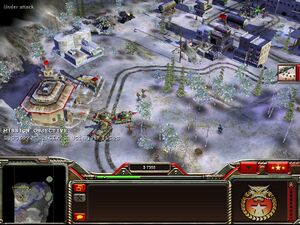 Capture the Weapons Factory with Black Lotus and garrison troops in civilian buildings. 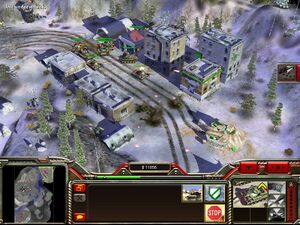 After crossing the bridge to the east, vehicles clear the area at the final Stinger Site.

Tank Hunters are your best option here, there is not room for many vehicles. The town needs a minimum of clearing first.

Soon, a cut scene will appear — with air power delivering the final destruction.