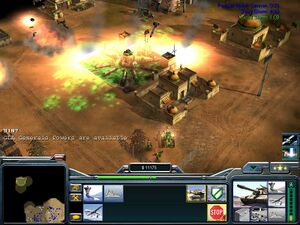 Destroy the Scud Storm with your Particle Cannon and Scud Storm before it has a chance to activate. Destroying the Arms Dealer located above the Scud site will slow down the GLA's armor production, but will also start the 30-minute countdown timer.

The four missile silos must be captured (not destroyed) before they release their toxin-filled missiles toward civilian targets. This is a timed mission, but you shouldn't feel too rushed to complete your objectives. The 30-minute countdown to missile launch does not start until you actually attack the north-central GLA base. Two of the missiles are in the far north of the map and the other two are located in the northeast corner.

A contingent of GLA forces, along with their base, will join you in this mission. It will be necessary to keep your base well-defended with armored vehicles to withstand the sneak attacks perpetrated by the GLA through Tunnel Networks. Your Scud Storm and Particle Cannon must be well-defended while they are being built or they will be destroyed.

The GLA attacks are spaced far enough apart that you will be able to protect your base with reasonably good defenses. The pace is not as hectic as in the previous mission.

This is truly a free-form mission, as there are so many ways to destroy the GLA. Your ground forces can be aided by a vast array of specialized weaponry, including the Spectre Gunship, A10 Missile Strike, Fuel Air Bomb, Leaflet Drop, Scud Storm, Particle Cannon, and Anthrax Bomb. (available at the GLA Command Center)

Key Strategies
* Capture the two oil derricks by the GLA base for much-needed funds.

The GLA base is pretty much pre-built for you. The only buildings that need to be added are the Palace and the Scud Storm. 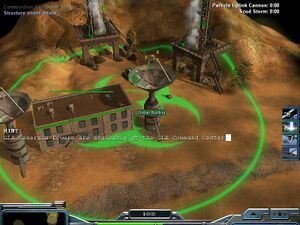 Destroy the structure in front of the missile site with your Scud Storm.

Destroy the Scud Storm with your own GLA-built Scud Storm and the Particle Cannon combined before it has a chance to launch.

From this point on, it is a freestyle mop-up campaign to destroy the GLA defenses on the way to the missile sites. 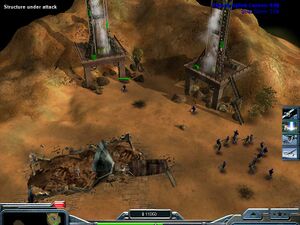 There will be no resistance to capturing the missile site after the Scud Storm attack.

The northeast base is not well-defended and can be attacked by a variety of ground units. A quicker solution is using the Scud Storm to knock out the structure in front of the missile site and then capturing it with an Ambush team.

Destroying the Northern Base and Missile Site[edit] 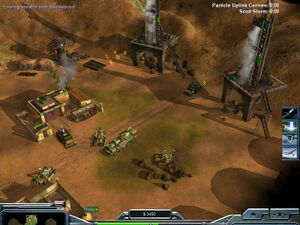 Destroy the Arms Dealer below the north-central missile site to slow down the GLA's defenses.

Now there is only the northern base to worry about.

The 30-minute countdown will start only if you attack the actual northern base itself by any of your special weapons. 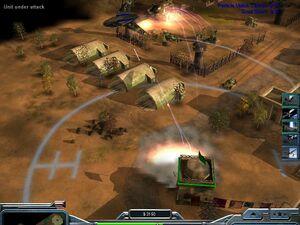 The garrisoned civilian structures below the northern base can be pummeled by your Spectre Gunship and other means without starting the 30-minute countdown.

The garrisoned buildings and military structures south of the actual base can be totally destroyed by Fuel Air Bombs, A10 Missile Strikes, Scud Storm, Particle Cannon, Spectre Gunship, et cetera without starting the timer.

Once the timer begins its countdown, move forward with the offensive units of your choice. The Pathfinder is great at keeping GLA infantry suppressed -- and the Avenger will minimize the damage caused by Scud Launchers.

At the border of the northern base, a line of Stinger sites and Tunnel Networks may slow down your progress. Use a Scud Storm to knock out these defenses.

Move forward carefully until you are in a position to capture the last two missile sites.

Destroy the Scud Storm as outlined above. As soon as your Scud Storm recharges, destroy the building below the missile site in the northeastern corner. Send Ambush troops in to capture that launch site.

Repeat the same process at the missile site in the northern base. Destroy the Arms Dealer there with a Scud Storm or other method and send in another team of Ambush troops to capture the missile sites.