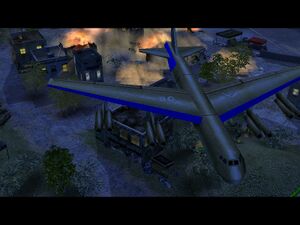 U.S. bombers on loan to China for carpet bombing operations.

This is a night mission on a large map containing four GLA bases that must be destroyed. Not every GLA building on the map must be located and attacked. The narrator will tell you when a base is considered neutralized. 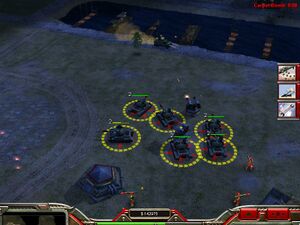 Most attacks will come from the northwest. Gatling cannons at the back (northeast) of the base can destroy GLA tech vehicles that slip past your forward positions.

You start with a rather extensive base, with a comforting number of Gatling cannons and bunkers for initial security.

First build an extra supply truck at the supply center, as cash is a bit tight at the beginning. Empty the troop carriers and put the soldiers inside bunkers. Build the Weapons Factory reasonably close to the front of your base for quicker repairs, then a barracks. Next build an extra Nuclear Reactor or you will go “offline” after further structures are built and the gattling cannons will quit operating.

Start to build at least five Battlemaster tanks or Gatling tanks to protect your base from varied attacks. The most “irritating attacks” will come from Rocket Buggies, as they fire from so far away.Build a few MiGs and use these whenever a buggy bugs you.Don't set them on guard in the areas around your base yet-there are stinger sites nearby. Battlemaster tanks appear much more sturdy and your Gatling Cannons can handle incoming infantry. Continue to repair and replace as necessary while you research and build your Overlord tanks in the future.

Build a Propaganda Center for important upgrades. Build an extra Gatling Cannon in the upper northwest part of your base. If you place it too near the water edge, a Rocket Buggy on the other side of the water will destroy it.

Although it may seem unusual, it can be handy to build extra Gatling Cannons also on the back side, or northeast side of the base. The reason for this is the tech vehicles zoom by so fast, sometimes they reach the back of the base.

At every opportunity, lay down your cluster mines to slow down attacks. Use your Carpet Bombers from the Airfield and the Artillery Barrage to target nearby targets of concern.

Garrisoning your troops in nearby buildings can be somewhat futile, as the Rocket Buggies will just destroy the buildings from a distance when you are not babysitting these troops.

By now, hopefully you can start building your first Overlord tank. Upgrade all Overlord tanks with Gatling cannons.

Repair damage to your base, as necessary, and build up your fleet of Overlords to at least three, parking them in the northwest corner of your base to receive experience and promotions. 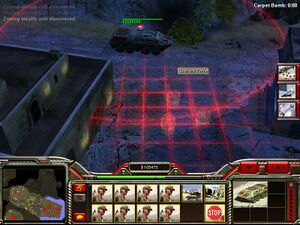 A frontal assault of the complex of buildings immediately to the northwest of your base (toward the center of the map) can be disastrous, as the counterattack is fierce with RPG troopers and rocket buggies. Overlord tanks will be lost. It is suggested to tackle this area later in the game.

That being said, it is good, clean fun moving your Overlords slightly forward of your base, to the northwest, causing massive damage to the lightly armored vehicles zipping around in the area.

Aerial assaults are a great advantage in this mission, but partially damaged stinger sites will rebuild if they are not completely destroyed. Use a double strike of Artillery Barrage and Carpet Bombing to permanently remove these fixtures.

Although there is an additional supply depot north of your base, it is not necessary to set up a second base in this area. Your cash flow from hackers and eventually the oil derricks to the west will be more than sufficient.

Once you feel secure with your base and you have at least three Overlords ready to rock n roll, head west, moving along the far south edge of the map. Have a few backup troops for security. Use the Emergency Repair when necessary.

By now, you should be able to afford more Overlords, and Overlords receiving too much damage can be sent back for repair and replaced by another.

Thankfully, with the Gatling gun upgrade, you can now spot and destroy demo traps along the street heading due west. Carefully take out all enemy troops along the way until you come to the oil derricks. Send a troop carrier to capture these two oil derricks. Research Capture Building at the Barracks if you have not done so already.

Leave sufficient troops at this location to protect the oil derricks.

There is also a third structure that can be captured, but it will be destroyed immediately by GLA troops if you have not cleared the area just west of these structures.

Although there are many ways to beat the mission from here, the upgraded Overlord tanks make the rest of this mission a fun, GLA-bashing epic. With three Overlord tanks (hopefully at least some of them upgraded to two bars for self-repair) you can now work your way from this southwest part of the map to the northeast, destroying the three smaller GLA posts in the process.

Note: It is not necessary to explore and destroy every GLA structure on the map. The game's narrator will inform you when a GLA outpost has been destroyed. 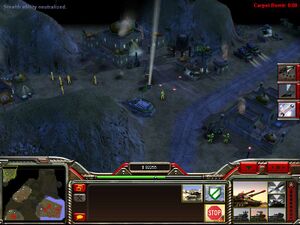 From the oil derricks in the southwest, sweep northeast to destroy three smaller bases before heading toward main GLA base in the northwest corner.

When this is done, have a few more Overlord tanks (or destructive vehicles of choice) join you to destroy the final base in the northwest.

Note:If you spend a general point on nuke cannons and build one or two you will find it easier to destroy the GLA, although these have to be used carefully and slow things down. It is suggested that when you destroy a GLA base, build airfields on it's ruins, and start making MiGs-you can't build many airfields in your original base as it'll become too clogged. Protect the airfields with Gatling cannons. You can use the MiGs to protect your original base so that you don't have to babysit your troops there. You can also use them to hit important enemy structures, or to support your ground troops when they come under heavy fire.

This strategy has been tested in Brutal mode with minimal losses, so it will work for any mode. This mission will reward a systematic approach (and test your multitasking skills). It utilizes a simultaneous three-prong advance in alternating stages.

As usual, the early game focuses on defense; the offensive needs to wait until you can build Overlords. Create a 2nd Supply truck immediately (when your Supply dock runs out, you should be in control of the north one). Load bunkers initially with Infantry from the Troop crawlers, then with Rocket soldiers when available and guarded by Gatling tank(s). Use MiGs to guard area immediately in front of base, first taking out nearby Stinger sites with Artillery barrage. Drop Cluster mines and set mines for structures, especially Gatling sites and Bunkers. Be on the lookout for Rocket buggy stand-off attacks, Technical base-rushing and Suicide bomber attacks (originating from train station to the west).

Note: these units should advance in formation (Ctrl + F) to avoid exposing Troop crawlers to threats or other units to Demo traps.

Once each ground Task force reaches the end of their respective map direction, use them in a coordinated advance to the northwest: north force advancing west, and west force advancing north. It is not necessary to eliminate everything, but it is more satisfying.