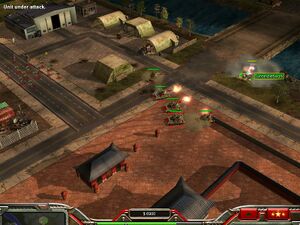 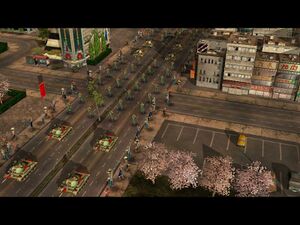 A beautiful day for a parade in downtown Beijing. 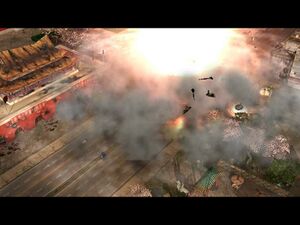 A beautiful day for a parade, that is, until the GLA gets involved.

The player starts with a standard base with a large amount of Chinese soldiers and three dragon tanks. Car bombs will attack your base and destroy the two bunkers at your base's opening. To save the Red Guards inside, have them abandon their bunkers as the cars will only attack them. If you are fast enough, you can send your Dragon Tanks to stop the car bombs before they are in range. However, simply holding your units back will make the car bombs hesitate in attacking. This gives you time to upgrade your bunkers with mines. Once they are set, move forward and watch as the suicide bombers' attack spectacularly fails!

Hit the three-star button on the right-top side of the control panel to choose your General's Power of Red Guard Training. All Red Guard will be built as veterans.

Head toward the east, destroying any GLA encountered.

Before you advance, take a few units and locate a destroyed red building with a massive courtyard (that would be Tienanmen square). When you find it you get two Overlord Tanks! Upgrade them anyway you want (recommended: one with a Gattling gun for use against infantry and the other with a Speaker Tower to heal both it and nearby units) and have them destroy the Tunnel Network protecting the bridge. After you destroy the Network, a number of surviving Battlemaster tanks will appear and join your forces (or possibly before; it's difficult to determine when they show up).

Have a tank go south-west and enter the Forbidden City area (it's a large complex of red buildings that haven't been touched by the GLA attack). Locate it and enter. Once you enter you'll find additional survivors in the form of two Battlemasters and two Dragon Tanks! If you follow this strategy, you can actually win the mission without even producing any units! Just find the survivors and you can easily destroy the GLA while rescuing your fellow countrymen for the glory of China.

As you make your way across the bridge after dispatching the GLA forces in the city, your assistant will inform you that a battalion of GLA vehicles and infantry are approaching from the GLA's position. You needn't worry, as a nearby squadron of MIG fighters will dispatch them for you with their napalm missiles. 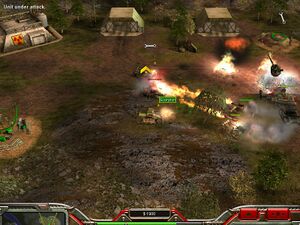 Advance your troops until you reach the nuclear facility.

After crossing the bridge, turn east with your forces to make your way to the GLA position. If needed, build a reasonable amount of reinforcements at your base and use the waypoint command to have them join your advancing troops. You will encounter an assortment of GLA infantry and a few vehicles, though the latter is usually positioned around the Nuclear Bunker.

Advance and destroy all forces encountered until you reach the nuclear facility to the north. Destroy this structure to win this mission.

Secret: After crossing the bridge, head west instead of east. There are rocky mountains that your soldiers and tanks can climb over. Then the nuclear facility is ahead with nothing protecting it from the rear.