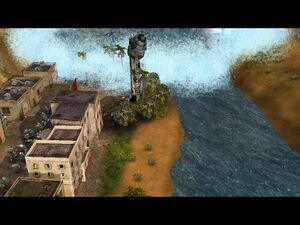 After destroying the last GLA structure east of the river, Rocket Buggies destroy the dam, and Part 2 of the mission begins. 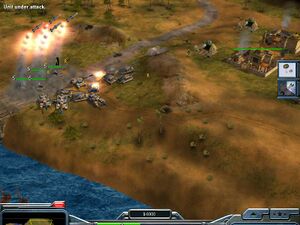 Pathfinders and Tomahawks keep GLA troops at a safe distance.

The first half of this mission consists of building up your army, crossing the bridge and destroying the GLA base. There are no time constraints involved but the base builds itself up as time goes on; the longer you wait to attack, the harder resistance will be. 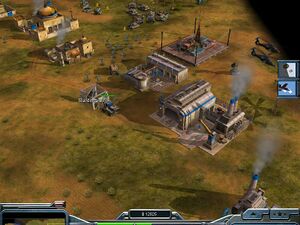 You can capture the GLA Command Center, Arms Dealer and Barracks to build GLA-type troops for the second part of this mission.

Alternative: If you capture a GLA structure that can produce Workers, you can tech up all the way to being able to build a Scud Storm. This will greatly reduce the mission's difficulty, as a joint attack from the Scud Storm and an A-10 strike can instantly destroy the enemy Scud Storm. The GLA do not appear to rebuild any of their structures so a single Scud Storm can put their base permanently out of commission. As an alternative strategy, you may transport your workers to your side of the river and build up a GLA base on your side (at this point, you don't need to build up a base on the GLA side). Please note that using this strategy will mean that you will be hit by the scud storm at least once so remember to space out your buildings while building up your GLA base. Before the scud storm hits, you must construct at least one scud storm and two black markets in separate locations. After that, you should spam as many scud storms to clear up the enemy base and the accumulated enemy units and then send Comanches to mop up. 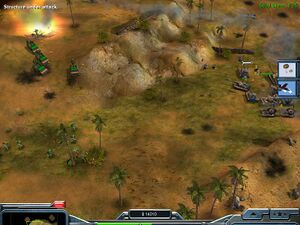 The fighting is furious on "Hamburger Hill." The GLA doesn't want to lose their Scud Storm. 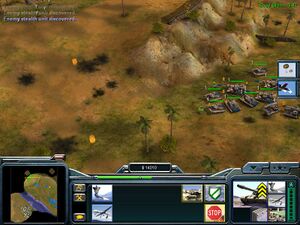 Pathfinders will expose Demo Traps and keep infantry at a distance. 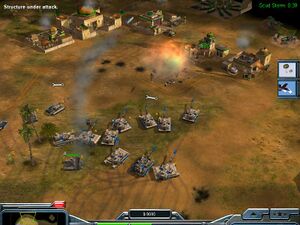 GLA's perimeter defenses have been breached. Leave nothing standing!

The dam is destroyed by the GLA and the north part of the map opens up. At this point, the GLA begin building a Scud Storm as well.