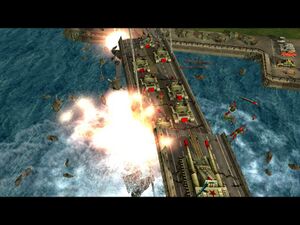 The GLA have infiltrated Hong Kong and have taken over the Convention Center. Destroy this structure and the two attached garages to complete the mission.

Yes, you probably feel pretty annoyed when your taskforce is destroyed by a GLA mine, but don't worry, the mission is far from being over. At the start of the mission, you have two Dozers, a Battlemaster and several infantry and rocket soldiers. To start:

You won't have to worry about base defense, so just focus about slowly carrying out your offensive mission. Take a combination of six battlemaster and gattling tanks slowly along the ocean-front street north toward the Toxin Tractor Facility. Park your vehicles near the intersection which leads to the Convention Center and let units build veterancy while GLA units unsuccessfully rush your units. 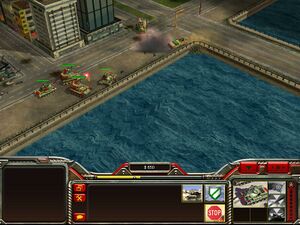 Park your units at the intersection to destroy incoming GLA forces. Your units will quickly build veterancy.

When the assault slows, head north toward the toxic facilities and destroy or capture them. Be careful of the spilt anthrax, as this will destroy both infantry and tanks.

Keep a close eye out for enemy units behind you while you are destroying this base, as your distracted troops can be destroyed while firing at the buildings, and remember to destroy the barracks on the far side of the toxic facility.

Go back to the base to repair your vehicles. Instead of heading along the obvious route to the center, take a soldier and send him down near the docks. Your forces are then greeted by a Ferry driver who will take your forces to the center. Load up a force of two Battlemasters and maybe a troop crawler or a Dozer and hit 'Transport.' Your force is then sent to the center. Because the GLA have no idea that you are in the the ferry so they will not attack it. Immediately send out your two tanks followed by your other vehicles or infantry. 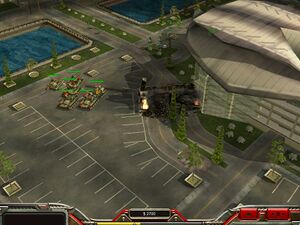 Stop firing on the Convention Center when GLA troops are approaching.

Destroy the convention center and the two attached garage structures at the front of it to win the mission.

If you like challenges it is actually possible to beat the level without losses just with the troops at your initial disposal (1 Battlemaster, 2 Bulldozer 6 Red Guards and 4 Tank Hunters) without building any structures or spending any money.

Take your entire force towards the ferry. You may divert one red guard to pick up the UN aid package near the supply stash if you wish but send him too near the ferry dock after that. You may also send one of the bulldozers to the other side of the bridge as GLA will not attack it there (even though the bridge is visibly destroyed, due to a glitch an invisible path remains where it once stood so you will amusingly see your bulldozer effectively driving across the water).

Put all your Tank Hunters and 4 Red Guards in the building right next to the ferry dock. Put the remaining two Red Guards next to the two benches behind the building and 1 Bulldozer next to the building (from the side of the dock) so that the building shields them from GLA attacks while the Bulldozer can effect repairs to the building if needed. Hence positioned, your infantry will repell any GLA infantry/technical attack without losses. Do not approach anywhere near the GLA toxin base and there will be no Toxin Tractors to attack your makeshift bunker to spoil your day. Do not go near the train station either as you don't need more troops (but the more you have, the more difficult it would be to keep all of them alive up to the end).

Take just your Battlemaster to the convention center by ferry. Run over the GLA worker and 3-6 patrolling Rebels and start destroying the GLA Supply Stash. When the GLA Technicals attack your Battlemaster use the gun, when the Rebels attack - run them over. The goal is to keep your Battlemaster in action long enough for it to gain the self-repair ability (2nd experience level). Do not attack the Convention Center's enclosed parking structures as such an attack would trigger periodic car bomb attacks that may easily destroy your Battlemaster. It is also prudent not to attack the Convention Center yet as it would trigger waves of Rebels and Suicide Bombers that would make things more difficult, although it is possible to succeed even with that. If your Battlemaster gets too damaged to survive near the Convention Center for long in face of constantly attacking Rebels and Technicals transport it back to your makeshift bunker to self repair (or gain experience while being protected by the bunker if you failed to gain the ability thus far). The GLA will then attack your makeshift bunker and be slaughtered. Deprived of it's worker the GLA has limited resources to produce units in Barracks and Arms Dealers.

Once you finally destroy the Convention Center the waves of Rebel/suicide bomber attacks will stop. After your Battlemaster clears any remaining GLA infantry, for maximum damage to the GLA finally move it towards the Toxin Base, while finally abandoning your makeshift bunker with your infantry and moving all of them near the yet undamaged Convention Center enclosed parking structures. Use the Battlemaster to destroy all the Toxin Tractors (do not let them get to your infantry!) and then the Toxin Base itself. Prior to triggering the Toxin Base activity, you may also pick up the second UN aid package in the north-eastern corner of the map, but if you use any of your vehicles for this take care not to run over any of the civilians as the fleeing remainder will snatch the package before your nose.

The only remaining thing to do now is to destroy the parking structures with your infantry. You should attack one structure at the time using all your infantry of one type (either all Tank Hunters or Red Guards) with all the infantrymen of the remaining type positioned next to them to destroy any attacking car bombs before they kill anyone. Do not position any of the infantry right next to the attacked parking structures or an emerging car bomb will hit and kill at least some of them before the infantry has enough time to destroy them. Use the same system to destroy the second structure once you destroyed the first and you have the flawless, totally free victory (no money spent, and 3500$ gained through UN packages).