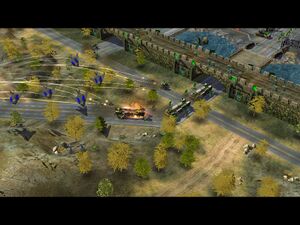 The GLA makes a final stand behind this heavily fortified wall.

This final mission can be quite difficult — finding the right strategic mix to fend off a fierce land assault by the GLA, while being bombarded by battalion-destroying anthrax attacks and the Scud Storm. 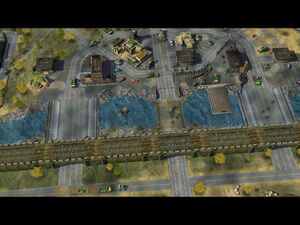 This cut scene gives a hint to the location of the GLA Arms Dealer. Destroying it may slow down the GLA offensive. 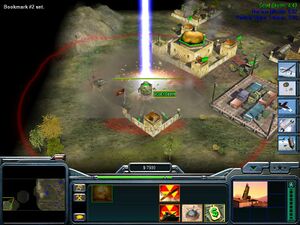 Keeping your base intact while building your Particle Cannon is a challenging task.

The largest part of this mission is surviving long enough to establish your Particle Cannon to destroy the Scud Storm. Anthrax attacks will also be encountered, a blue, expanding mist that destroys all vehicles and troops in its path.

Although a strategy combining the Particle Cannon and Chinese Nuclear Silo can be used to destroy the Scud Storm, this absorbs an extra 9000 credits of resources for the War Factory, Propaganda Center and Nuclear Silo — not to mention the extra power generation that will need to be built. 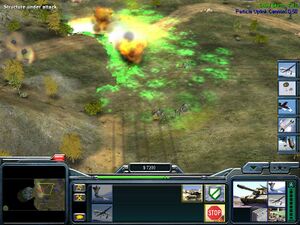 Although the Patriot missile site is destroyed by the Scud Storm, troops have been safely moved out of harm's way. 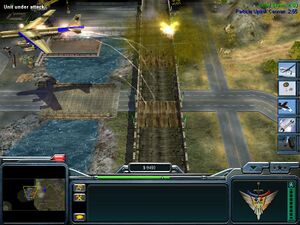 Destroy the fortified wall with Fuel Air Blasts, A10 Missile Strikes and your Particle Cannon. 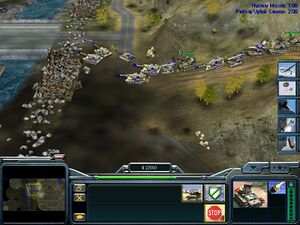 There is no hurry to move troops forward until after the wall is completely destroyed.

After the Scud Storm is destroyed and the GLA counterattacks are survived, rebuild your offensive force. While doing this, destroy the remaining eastern GLA wall with Fuel Air Blasts, A10 Missile Blasts and the Particle Cannon.

It is easier to have it completely destroyed before bringing your troops west, as the wall is riddled with fortified troops.

Once the wall is destroyed, bring a large number of Paladins, Tomahawks and Pathfinders toward the GLA base. The Pathfinders are necessary to reveal Demo Traps and to protect your armor from infantry.

From here on out, the GLA will be on the run as you perform mop-up operations on their base.

Another option is to get Spy Drone as one of your powers and send it to the far lower corner of the map (GLA side) as soon as possible before any buildings appear (obviously the scud storm). Build a particle up-link cannon and send a level 3 A10 Missile Strike or a Fuel Airbomb if you don't have level 3 A10 Missile Strike (though it's doubtful the bomber will survive, as there is a load of quads in their base) and use said powers to destroy the wall. Use the Spy Drone instead of Pathfinder to scan the area behind the wall so when your troops go there they can destroy it. The China base reactors are a better alternative energy source ($600 difference).

Set up a defence at the western choke point of your base area with 2 or 3 Patriots, 2 snipers and some tanks. Build a Comanche as well and keep it near the Command Center to take out any surprise attacks.

Capture the Chinese base, build a War Factory and Propaganda Center and start cranking out Overlords. Send these to defend the southwestern choke point. 3 of these can hold the choke point, 4 or more will be used for the invasion force. Of these, 2 should be equipped with speaker towers, 1 with a gatling, and 1 with a bunker. In the bunker place Colonel Burton, a sniper, 2 rocket soldiers and a ranger with flashbang equipped. Upgrade Propaganda. You can build a nuclear facility as well to upgrade the Overlords if you like.

Use a level 3 air strike and a fuel-air bomb to destroy the GLA defence wall at its southernmost point (including the bridge), and just march the Overlords through. Stay close to the southern boundary and keep your units together. The Overlords will have to eat a few demo traps so don't go too fast and allow them time to repair. Clear garrisoned buildings with the ranger. The sniper, gatling, and Colonel Burton can take care of any infantry, and the Overlords and rocket soldiers are more than a match for the ground defences and armoured units. Destroy the SCUD Storm in the far southeastern corner first, then you can take out the rest of the base at your leisure.